Researchers in Japan have used CRISPR technology to create gene-edited opossums. This marks the first time anyone has successfully genetically engineered a marsupial — and it could have huge implications for medical research.

“I’m very excited to see this paper,” John VandeBerg, a geneticist at the University of Texas Rio Grande Valley, who was not involved in the study, told MIT Technology Review. “It’s an accomplishment that I didn’t think would perhaps happen in my lifetime.”

Marsupials are mammals that give birth before their babies are fully developed. The newborns then take up residence in a pouch or on their mother’s stomach to finish growing.

Opossum pups are born just 14 days after fertilization, when they’re smaller than bumblebees. They then spend another month or so developing outside the womb.

Because the gray short-tailed opossum does most of its development on its mother’s abdomen, it’s useful for reproductive research — scientists can study the process without any invasive procedures or imaging tech.

They’re also useful for studying other health issues. Opossums can also get skin cancer from UV exposure, like humans, and opossum pups have a unique ability to heal spinal cord injuries after birth.

Being able to create gene-edited opossums would help scientists maximize the potential of opossum research.

They could knock out different genes to identify which ones play a role in the spinal cord healing, or over-express others to see if there’s a way to decrease the animals’ susceptibility to skin cancer.

However, despite more than two decades of trying, no one has been able to genetically modify opossums — until now.

To create gene-edited opossums, researchers at the RIKEN Center for Biosystems Dynamics Research first had to get their CRISPR gene editor into the fertilized egg.

That’s a challenge because fertilized opossum eggs are covered in a thick layer of proteins and a hard shell that a standard needle can’t even penetrate.

The researchers had to time the mating of the opossums so that they could work with the eggs earlier in their development, when the coating isn’t as tough.

They then combined the traditional thin needle with a drill with an electric charge — that allowed them to penetrate the egg without damaging it — and dropped in their gene editing package.

First of their kind

To make it easy to see whether it worked, the team programmed their CRISPR tech to disrupt a gene for making body pigments.

Sure enough, when the surrogate mother gave birth, one of her babies was albino and one was mosaic (a coloring indicating that one of the animal’s two copies of the gene had been knocked out).

When the two mutant opossums were bred, their babies were also albino, demonstrating that the edits had been inherited.

Now that the RIKEN team has proven it’s possible to create gene-edited opossums, it’s up to others to take the tech and run with it.

“They’ve shown it can be done,” Richard Behringer, a geneticist at the University of Texas, who wasn’t involved in the study, told MIT Technology Review. “Now it’s time to do the biology.” 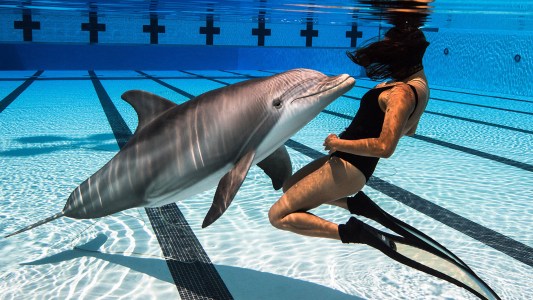 Could robotic dolphins help marine parks become more humane spaces where people can learn about and connect with nature?

Series | Just Might Work
How robots could end animal captivity in zoos and marine parks7:45
Subscribe to Freethink for more great stories
Subscription Center
Challenges
Video
Freethink
Subscribe
We focus on solutions: the smartest people, the biggest ideas, and the most ground breaking technology shaping our future.
Subscribe