There are moments when scientists come close to creating the future artists envision for us. Researchers at the University of Tokyo have taken a step closer to bringing a sci-fi standard into reality: living human skin for robots.

Made from real cells, the living skin not only has the realistic texture that faux skin has difficulty mimicking, but also the ability to keep out water and heal itself.

“I think living skin is the ultimate solution to give robots the look and touch of living creatures since it is exactly the same material that covers animal bodies,” said Shoji Takeuchi, first author of the study and a project professor at the University of Tokyo who works on biohybrid systems.

“Biological machines have been evolving over millions of years, and they are now capable of merging different functions ranging from actuation to sensing and powering,” researchers, including Takeuchi, wrote in the journal APL Bioengineering.

In comparison, the technologies behind sensing and activating of robots are “not yet adequate,” as they delicately put it.

The current state of human-like skin for robots is indicative of the problem.

“Humanoids are robots that can perform a wide range of tasks to interact with humans in medical care settings, nursing care situations, and the service industry,” the researchers wrote in their study, published in Matter.

The need is more than, ahem, skin deep; the jobs we put humanoid robots in require them to look something like us to encourage likeability and working with them as best as possible.

Although silicone, often used as skin for robots, can look organic, it has a hard time replicating intricate textures, like wrinkles, which are subtle cues for authenticity. And it still lacks the properties, like self-healing, that make true skin superior, the researchers wrote.

Crafting living skin for robots thus far has met with limited success; it’s difficult to get the organic material to conform to the uneven, moving surfaces on a robot.

“With that method, you have to have the hands of a skilled artisan who can cut and tailor the skin sheets,” Takeuchi said.

True living skin for robots: The University of Tokyo team has now developed a new “tissue molding method,” which forms the skin right around the robot, providing “seamless skin coverage” over a robotic finger.

The team submersed the robotic finger in a mixture of human dermal fibroblasts — a type of skin cell — and collagen: the two main ingredients in your own skin.

Those ingredients have a natural tendency to shrink, which Takeuchi says underpins their success; the shrinking made the skin adhere tightly while conforming to the finger.

With this layer as their base, the researchers then painted on a layer of human skin cells called epidermal keratinocytes, which make up the lion’s share of your skin’s surface. This gave the robotic skin humans’ texture and our water-resistant capabilities.

“The finger looks slightly ‘sweaty’ straight out of the culture medium,” Takeuchi said; seeing such realistic flesh but hearing the motors driving it proved to be … interesting.

“We are surprised by how well the skin tissue conforms to the robot’s surface. But this work is just the first step toward creating robots covered with living skin.”

The living skin was tough enough to withstand the finger’s movements, thick enough to be tweezer-able, and can even heal itself using collagen bandages.

“We are surprised by how well the skin tissue conforms to the robot’s surface,” Takeuchi said. “But this work is just the first step toward creating robots covered with living skin.”

Next, the team wants to incorporate the more complex structures that will round out the realism — hair follicles, sweat glands, nails, and neurons. 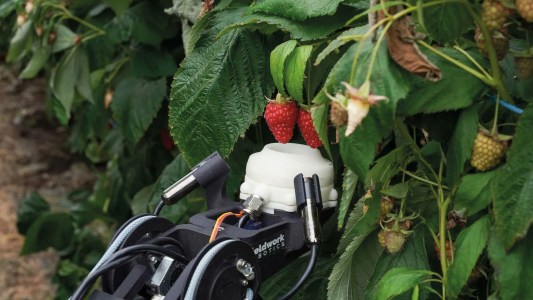 A pair of harvesting robots are picking raspberries in Portugal, demonstrating the ability of tech to help combat seasonal labor shortages.