In just five years, Sophia the robot has already established herself as an activist, a musician, and a fashionista. Her next title? Digital artist.

The AI is getting into the digital art world at an opportune time, too — thanks to a new type of crypto asset called a “non-fungible token (NFT),” digital artists can now quickly earn millions of dollars for their creations.

A painting selling for millions of dollars isn’t unusual in the traditional art world, but digital artworks — the kind made from pixels instead of paint strokes — are notoriously difficult to sell.

The problem is one of supply and demand.

Original paintings are one of a kind, so collectors are willing to pay big bucks to be the only person to own them. However, making an exact copy of a digital artwork can be as simple as right-clicking a computer mouse — and too much supply decreases the demand.

An NFT, however, lives on the blockchain so it can’t be duplicated. Artists are creating the tokens to represent their digital art — the person who owns the NFT for the work essentially owns the original, even if countless digital copies exist.

Each token is tied to a unique piece of art, so no two tokens are ever identical. This is how NFTs create scarcity in the marketplace.

In recent weeks, interest in NFT-linked digital art has exploded.

Artist Michael Winkelmann, who creates under the name Beeple, earned $69.3 million selling an NFT for a digital collage at auction, and other artists have sold images, songs, memes, and more for thousands or even millions of dollars.

Sophia the robot is now getting in on the action.

Buy an Original Sophia the Robot

On March 15, Hanson Robotics, the creator of Sophia the robot, announced that the humanoid had collaborated with artist Andrea Bonaceto on several digital artworks.

“We fed Andrea’s works into Sophia’s own neural networks, along with many of Sophia’s latest paintings,” CEO David Hanson told Cointelegraph.

“Subsequently, she generated a powerful series of new images, which she then rendered both digitally and as brush strokes, which she painted with her own hands.”

Bonaceto compared his collaborator’s creative process to that of humans.

“It goes through her neural network, and then she basically (reinterprets) what she has seen, which (is what) also happens with humans,” he told Newsweek.

NFTs are for the creative industry what Bitcoin is for the financial industry — a paradigm shift.

Each of Sophia’s works will be linked to an NFT that will be available for purchase on the digital art marketplace Nifty Gateway starting at 6.30 pm ET on March 23.

Hanson shared a preview image with Decrypt, and others are expected to be revealed on Sophia’s and Bonaceto’s social media accounts prior to the sale.

“NFTs are for the creative industry what Bitcoin is for the financial industry — a paradigm shift,” Bonaceto told City A.M. “It is very exciting to be at the cusp of this new trend.” 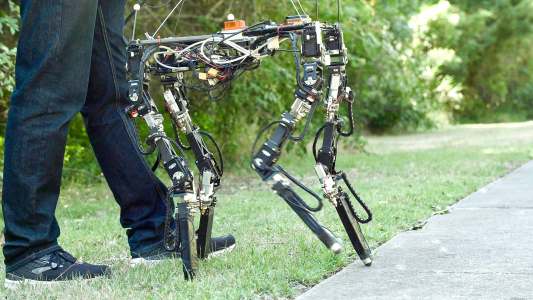 Dyret is a shape-shifting quadruped robot that can change the length of its legs. This helps it walk across different terrains or account for any injuries.

Robotics
Quadruped robot can break a leg and keep going
Subscribe to Freethink for more great stories
Subscription Center
Challenges
Video
Freethink
Subscribe
We focus on solutions: the smartest people, the biggest ideas, and the most ground breaking technology shaping our future.
Subscribe