One of the most remarkable advances in regenerative medicine has been the development of “mini-organs”— tiny versions of, say, a patient’s lungs or intestines—that are grown in a lab using stem cells. These “organoids” can be used to see how an individual person will respond to different drugs, even before they’re treated. Eventually, they could be transplanted to help repair tissue. But they are expensive and time-consuming to make. Now, researchers have shown that a robotic system can both mass produce mini-organs and automatically test the results to make sure they’re developing into the right kind of cells. It has huge potential to scale up the technology, making the organoids more true-to-life and more affordable.

Medicine, For You: Last year, scientists in the Netherlands announced they had developed personalized mini-intestines to test potential drugs for cystic fibrosis (CF) patients. CF damages many different organs, and it can be caused by thousands of different mutations that slightly alter the disease and how it responds to drugs, which makes treatment expensive and difficult. Over 1,500 Dutch patients had tiny versions of their guts grown from adult stem cells into 3D structures, resulting in dozens of one-millimeter scale models of their own intestines. This allowed doctors to test drugs to see how well they worked for an individual, leading to better, faster, and more personalized treatments.

Saving Lives, Saving Money: Some new CF drugs cost up to $236,000 per year, and, because the disease varies so much, governments and insurance companies have refused to pay for them without proof that they are likely to work for a specific patient. By growing mini-organs from the participants in the drug’s clinical trial, Dutch doctors were able to prove that their organoids correctly predicted whether a real person would respond to the medicine. Then they began testing other patients’ mini-guts and rapidly found the best candidates for the drug, convincing the medical bureaucracies to shell out for their treatment.

Tiny Organs, Huge Potential: There are limitless applications of this technique. Any drug, for any disease, affecting any organ could theoretically be shrunk down and subjected to a battery of tests in a Petri dish before being pumped into a sick person. We could grow copies of cancer patients’ tumors to see which drugs work best for their specific mutations. Drug companies could start testing on human organoids much earlier, making new discoveries and helping understand what medicine works best for each type of person and each version of a disease. It’s even possible that we could eventually grow and transplant perfectly matched tissue to repair organ damage. (Less medically related, but still cool: other scientists are planning to grow mini Neanderthal brains from ancient DNA to see how our evolutionary cousins might have differed from Homo sapiens.)

Ugh, Progress Is So Much Work: But growing mini-organs and mini-tumors is time consuming and expensive—on average a few thousand dollars per patient. And improvements come slowly: culturing stem cells, seeding new organoids, growing them, and finally testing and analyzing them is a long, tedious, and labor-intensive process. Each modification at any point in the process means the whole thing has to be started over and the results collected, analyzed, and compared again.

Please, Robots, Take This Job! Fortunately, we have robots for mindless, repetitive tasks. Researchers at the University of Washington recently showed that an automated robot could mass produce thousands of mini-kidneys in a fraction of the time. They estimate that the robot can do in 20 minutes what would take a human all day. Rather than adult stem cells, which can only grow into a certain kind of organ, their technique uses pluripotent stem cells, which have been reverse engineered to be able to grow into any kind of tissue, given the right environment. This means their robotic assembly line could potentially be used for growing any mini-organ. Even better, their system can automatically sequence the organoids’ RNA to see if they’re all growing into the right kind of cells.

Using this mass production technique, scientists were able to increase the amount of blood vessels in their mini-kidneys to make them more realistic, and they were able to search for new drugs by testing a bunch of different drugs on kidneys grown with a genetic disorder. If robots can scale up this technique for drug testing, personalized treatment, and regenerative therapy, I for one welcome our new robot overlords. 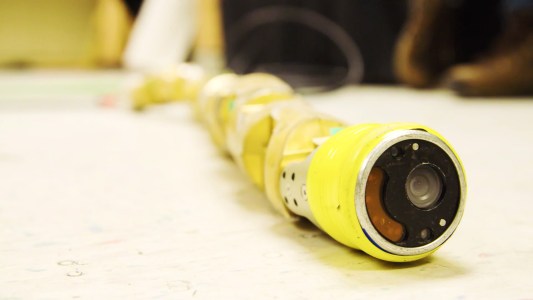 Believe it or not, there’s a good reason this robot snake exists

Robotics
Why researchers built a robot snake 1:20
Subscribe to Freethink for more great stories
Subscription Center
Challenges
Video
Freethink
Subscribe
We focus on solutions: the smartest people, the biggest ideas, and the most ground breaking technology shaping our future.
Subscribe