Shaw Smith’s home is less than two miles from the White Mountain National Forest. Snuggled against a backdrop of rolling peaks and deep valleys, his isolated house seems like the ideal spot to hunker down for a global pandemic.

But living far from an urban area, where small populations are spread out, has its challenges. One ongoing challenge — the lack of reliable, good internet — has been hugely exacerbated by the pandemic. So, with new urgency, and a bootstrapping effort, co-ops that once electrified rural communities are laying miles of fiber optic cables to bring high-speed internet to rural communities.

“The internet is vital to my life,” Smith says. It is something that goes unnoticed for many people. But slow internet woes aren’t only a problem for gaming or binge-watching (which is more prevalent, given the lockdowns). For many, internet access means having healthcare, connecting with family, making a living, or — as Smith points out — attending school.

Smith is a high school biology teacher who began remote teaching from his home in the spring. His satellite-based internet is iffy. It only works when the sky is clear, and a satellite is passing overhead. So, Smith checks the weather daily and goes to great lengths to ensure he can teach a class.

“There is simply no doubt that in a rural community like ours, there are so many homes that don’t have the kind of internet they need,” he says, adding that some of his students were unable to do their work because their family doesn’t have adequate internet.

“There comes a point where everybody’s got to have it — just from a realistic perspective,” he says. But there isn’t an internet service provider that will build the infrastructure required to bring his community high-speed broadband.

“There’s fewer people per square mile in rural communities. They don’t want to do it if they don’t get a profit from it. And, while I get that and I can intellectually understand it, I think that there’s a point at which communities have to say, ‘Hey, we have to take care of people before profits.’

As early as the 1930s, rural communities established America’s electric cooperatives to create a stable electricity source and make their lives easier. About a decade later, they added telephone service. Now, there are about 840 of these co-ops around the country, and many of them are laying miles of fiber optic cable to get their community online. With historical parallels to the Depression-era need for electricity, broadband is now the new essential service.

“If people didn’t know it before (COVID-19): broadband is now a necessity,” says Randy Klindt, founder of Conexon. He launched the consulting company about five years ago to assist rural electric cooperatives with fiber optics.

He says that the electric co-ops already serve rural areas, dead-end roads, and farmland. They cover 2/3rds of the country’s landmass with over two million miles of electric distribution line. It is a natural solution for them also to provide broadband.

The New Hampshire Electric Cooperative is one that is just entering this field. Seth Wheeler, its communications director, once wrote a book on the Depression-era electric cooperatives. At the time, rural communities could not persuade existing electricity providers to cover their neighborhoods, or they were charged exorbitant amounts. So, rural communities constructed an electrical grid of their own.

“They were literally farmers and people off the back roads that couldn’t get power. They got together and organized the cooperative and applied for loans and hired people. And pretty soon they had hundreds of miles of line, and they’re hooking up members left and right. The demand for their service was great,” he says.

Nearly 19 million Americans don’t have broadband internet access today — the population of the New York metropolitan area, but spread out over vast distances. As a consultant, Klindt says he has met with co-op boards all over the country. He sees first-hand that the demand for broadband is gaining speed because of the pandemic. Kids at-home are trying to log on and complete schoolwork, competing with parents for their limited internet connection. Business owners are transferring their services to the web. And telemedicine is gaining speed.

“In the last three months — in those meetings — I can feel the difference in the boards. They’re seeing it as a necessity now, and they think it’s something they can no longer ignore or put off,” he says.

In the last five years, Conexon has worked with 200 electric co-ops. Fifty are building fiber networks today. They have managed to install 2,500 miles of fiber per month, connecting almost 15,000 homes and businesses to the internet each month.

Many electric co-ops needed money from the federal government to get started. In 1935, President Roosevelt launched the Rural Electrification Administration, which went on to fund over 400 co-ops. Now, co-ops are bidding on federal funds from the Coronavirus Aid, Relief, and Economic Security Act (CARES) to lay a network of fiber optics and get their communities online.

Mississippi is seeing an explosion of new broadband projects piggybacking off existing electric co-ops. About 18 months ago, only one or two co-ops were doing this. Now, with the CARES Act putting money toward broadband, more than 15 co-ops are building a fiber-optic network in the state. Seven are Conexon’s clients. Most projects take years, but Klindt says 75 crews are working on their four Mississippi projects — building fiber-optic networks as fast as possible to meet the end-of-the-year deadline.

“I think rural Americans deserve the same speed and access and technology as people living in the city,” he says.

While these networks will reach many unserved people, Christopher Mitchell worries about other inequities — that the new networks may not reach rural Black communities.

Mitchell studies rural broadband networks with the Institute for Local Self-Reliance. He has noticed rural cooperatives that tend to serve whiter communities are investing in fiber at higher rates than those that serve Black communities, which tend to have higher rates of poverty. A co-op needs the majority of its members to pay a monthly service fee of $50 or more, which may be less than a for-profit corporation can charge in some urban areas, but it is still too high in places where most people live in poverty.

“There’s just something that I think we’re dealing with as a nation. We’re paying more attention to these disparities,” he says, arguing that more broadband co-ops, city and county-run networks, or public/private partnerships could address this need.

The New Hampshire Electric Cooperative is the power company in Sandwich, Shaw Smith’s community. Having fiber connected directly to his home would be transformative for the remote schoolteacher.

In June, 900 members of the New Hampshire Electric Cooperative petitioned the board to amend the electric cooperative’s mission to include broadband. The co-op is a non-profit, member-controlled cooperative. Everything that costs over a certain amount of money, and all significant decisions, must be approved by the members. So, the proposal went to a vote. It didn’t win, but the co-op’s communications director, Seth Wheeler, says he heard their message.

“We’re very responsive to our members and we want to do right by them and what they need. And so we’re hearing (this message) loud and clear,” he says, adding that because the vote came at a bad time, few ballots were returned. So, there is a new election underway. If passed, it will give the board more latitude to pursue broadband efforts.

In the spring, when the lockdowns first happened and “new normal” wasn’t a part of our vocabulary, Smith got creative to get the internet. He would drive to the elementary school or local library and park as close as possible so he could tap into their wifi. But, in March, it would get cold and uncomfortable in the car. Even just outside the library, Smith often lost connection. So, he always creates a backup lesson plan that students can do independently should the connection drop – doubling his workload.

Smith knows he needs a better solution. New Hampshire winters are rough, and his “office-car” won’t be cozy enough.

The New Hampshire Electric Cooperative’s vote will end on October 14th. Wheeler says, if it passes, the co-op will connect the first person before the end of the year. In the meantime, this fall, Smith arranged the use of a basement in a closed downtown retailer for days when his internet drops.

Update 10/30/2020: The New Hampshire Electric vote passed by 88%. Wheeler says, “Crews are hanging fiber and we are ready to reach out to about 900 members with service offerings. Full-speed ahead for broadband!” 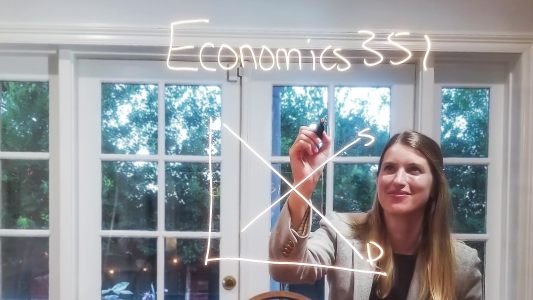 Educators new to online teaching are struggling to adapt. This teacher created a DIY lightboard that is being widely shared on Twitter.