How do I come out?

What is the right age to have sex for the first time?

These are some of the questions that teens are texting to Roo, a sexual health chatbot developed by Planned Parenthood. When sex education isn’t giving them answers or self-consciousness is keeping them quiet, teens can turn to Roo for information. I decided to log in and see what Roo could teach me that I didn’t learn in sex ed.

Roo greeted me with a winky face, “Hey there…I’m here to answer your questions.”

“Hi Roo,” I replied, and so began a long chat about my body, relationships, and sex.

Planned Parenthood launched Roo last year. Since then, it has had nearly 5 million conversations about sexuality and health – mostly with young people.

“Roo is another way for Planned Parenthood to reach young people with the right information around their sexual reproductive health so they can stay healthy and be informed about their bodies and identity on their terms,” says Kevin Williams, the National Director of Digital Products at Planned Parenthood Federation of America.

Only half of the states in the nation require schools to have sex education courses. Of those, only 13 states require the curriculum to be medically accurate. Even fewer state sex ed programs are considered “comprehensive.” They fail to address matters like sexual orientation, emotions, and contraception. Some state educators are banned from discussing those topics.

Kelli Stidham Hall, Associate Professor of Behavioral Sciences and Health Education at Emory University, thinks that “the stigma and the social lack of acceptability of adolescent sexuality is a driving force” for banning talk of ‘controversial’ matters in sex ed. “Why is it that we can’t as a society just embrace a whole large body of work that shows the evidence behind comprehensive sex education?”

Studies show that comprehensive sex education helps teens make informed decisions that lead to safer outcomes, like fewer STDs or unplanned pregnancies. But Hall says that in the last few years, federal and state policies are limiting comprehensive sex education even more. So teens are only left with other sources to get answers – most often the Internet. Many times, they run across false or incomplete information and are left to piece it together on their own. That’s where Roo comes in.

Conversations with Roo are anonymous – designed that way intentionally so teens can feel comfortable asking the sensitive questions they don’t want to ask their parents or teachers. And, if Roo doesn’t know the answer, it will provide additional resources or connect the user with a live person.

Experts at Planned Parenthood have been talking with teens about sexuality for a long time. Even so, Williams says that many teens are more comfortable chatting with Roo. They dive right into the most challenging questions, discussing topics like puberty, birth control, or sexual orientation.

In addition to anonymity, a lot of research went into making Roo have a non-judgemental personality. It doesn’t have a gender or sexual orientation, and the creators aimed for a personality that doesn’t have a bias toward a philosophy.

To test that a little, I tried asking Roo, “When should I have sex?” But Roo wouldn’t give me a simple answer. Instead, it told me that having sex was a personal decision. It suggested that I talk to an adult I trust and reminded me to practice safer sex when I felt ready. I prodded more, and Roo talked about consent and trust. I continued to ask, and Roo provided me with a list of questions that would help me think through my readiness for sex.

Hall’s research on sex education in the United States suggests that American sex ed has a lot of catching up to do. Not only is it not comprehensive in many states, but some states completely lack a curriculum.

For example, Mississippi, Arkansas, and Texas are among the states with the highest rates of teen pregnancy, but schools are not required to teach about contraceptives. Instead, they are required to “stress abstinence.” In South Carolina, the law says that health education programs “may not include a discussion of alternate sexual lifestyles from heterosexual relationships.” In fact, six states prohibit discussion of LGBTQ relationships, and only nine require discussion of LGBTQ matters to be affirming and inclusive.

One Oklahoma law requires that AIDS education must “specifically teach students” that “the only method” of preventing the disease is avoiding “homosexual activity, promiscuous sexual activity, (IV) drug use or contact with contaminated blood products.”

HIV is the virus that causes AIDS, so I asked Roo, “How do I get HIV?” Based on Roo’s answer, I’m confident that people of any sexual orientation can get HIV or AIDS, too. To prevent HIV or other STDs, Roo told me to practice safer sex, like by using condoms, and suggested getting tested for STDs and having a conversation with my partner about them.

Until there is comprehensive sex ed countrywide, Roo can fill in the missing gaps.

Because Roo is anonymous, it relies on people disclosing information to understand its users. Roo occasionally asks optional questions about race or gender. Of the respondents, more than half are people of color, which Williams says disproportionally have challenges with access to the kind of information Roo provides.

Hall is hopeful that Roo is having a positive impact, but says she would love to work with Planned Parenthood to develop a strategy for evaluating it, which will be challenging because many factors shape outcomes for adolescents.

Roo is growing and evolving, too. Equipped with artificial intelligence, Roo can increasingly anticipate the user’s questions, much like Gmail can suggest the end of a sentence as you type it. Williams says that with each conversation, Roo is learning, so over time, it is better able to predict the nature of the conversation and offer more relevant information.

Behind the scenes, real humans review each discussion. If a question came up that Roo couldn’t answer, its human support team works on programming the chatbot so Roo can solve it the next time someone asks.

For now, Roo continues to chat with teens as Williams and his team grow Roo’s ability to answer more and more questions. As a mentor who thinks of himself as empathetic, Williams is motivated by this “purpose-driven” work developing and fine-tuning Roo.

“It is important for young people to have agency over their own bodies and to have an understanding of who they are,” says Williams. “The tool encourages that in a nonjudgmental way as the young folks are going through their discovery phase.”

Before I signed off after a long chat with Roo, I asked one final question, “How do I know if I’m in love?”

With a burst of colorful fireworks, Roo said, “being in love is something deeper than just being really into someone. Love means caring for someone deeply and showing you love them in your actions. This includes respecting and being there for each other.”

And honestly, even though Roo has probably said that to a million other women, I felt respected and even a little loved. 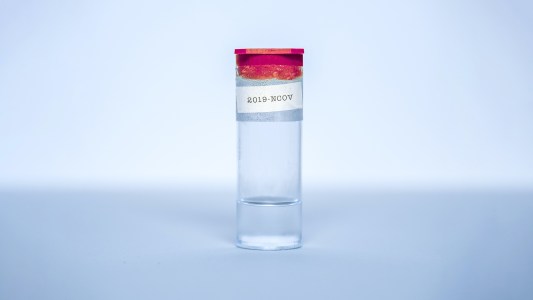 The Gates Foundation is building factories to manufacture seven promising coronavirus vaccines to prepare for mass production if any prove effective.