Winning the America’s Cup — the world’s oldest international sports trophy — relies equally on technology and innovation as it does on sailing skills. Looking at the America’s Cup boats, you can’t help but notice how futuristic they appear.

But this year, Emirates Team New Zealand had a competitive edge, when they enlisted a new crew member to hyper-boost their boat design process: AI.

The 2021 race officially began on March 10, when boats hit the water, but the real competition started three years earlier, when the new Class Rule was released. With each America’s Cup, the Class Rule defines the parameters for yacht design — and design can mean the difference between winning and losing.

Once the rule is released, it becomes a race to design and build the fastest possible America’s Cup boats. In a sense, sailing the racecourse is only a tiny part of the competition. In America’s Cup, the art of sailing is overshadowed by innovative design.

The Class Rule for the 36th America’s Cup included parameters for hydrofoils — one area where modification is allowed and a crucial part of the boat’s design. First introduced in 2012 by Emirates Team New Zealand, the futuristic hydrofoil was a complete game-changer for the race — allowing the vessels to fly above the water at speeds up to 63 mph.

Following the release of the latest rule, teams raced to design the fastest in the fleet of America’s Cup boats by making small but crucial tweaks to the hydrofoils, then having the sailors test drive a simulated version of the boat.

Simulators are a staple for every team in the competition. And spending time in the simulator is just as crucial as on-the-water practice.

“Every boat in the America’s Cup is designed with a computer simulator,” McKinsey senior partner Brian Fox said in a report. “Whichever team has the best simulator, and uses it most effectively, gains the advantage.”

But time spent in the simulator cuts into time the sailors could be spending on a real boat. So Emirates Team New Zealand recruited a new crew member to take over the job of test driving America’s Cup boats in the simulator — an AI bot.

The team no longer had to sacrifice on-the-water time to put in the simulator hours, according to a report by McKinsey. The AI bot had their backs — test sailing thousands of boat designs and new hydrofoils simultaneously.

Instead of the team investing the majority of their time trying new boat designs, they had more time to train for this race — gaining a competitive edge in both design and training. Additionally, the bot could work in the simulator without rest, gaining ground to the optimal design more quickly.

“Since the bot keeps experimenting if you coach it to learn in the right way, it compresses into hours what would take a human years to understand,” said Nic Hohn, one of the key project leaders.

Once they created the bot, like any artificial intelligence, they had to “teach” it how to be a sailor. The process is called “deep reinforcement learning,” a sub-field of machine learning. The approach trains the bot through trial and error — repeating scenario after scenario with endlessly adjusting variables, like wind speed, direction, waves, the lines (ropes) a sailor uses to control the sails, etc.

This creates an astonishing number of potential scenarios that AI has to be able to master. Game-tree complexity is the number of distinct plays, or paths, for a given game. It is often depicted in a graph that looks something like a branching family tree.

One bot could never solve that riddle, so they created a whole team of bots — all learning from each other.

“One way to think about the difficulty of the problem: game-tree complexity roughly tallies the size of the space one has to navigate while accounting for the set of possible game paths, or the sequence of decisions, that need to be taken,” said Jacomo Corbo, chief scientist at QuantumBlack, the firm hired to design the sailing AI.

One bot could never solve that riddle, so they created a whole team of bots — all learning from each other.

After only eight weeks of training, the AI mega-bot started beating the human sailors in the simulator. It became the perfect test sailor because of its consistency — and the fact that it could sail 24/7.

Eventually, the bot could teach the human sailors a thing or two: according to the report, the bot sped up New Zealand’s design process by a factor of ten between 2019 and early 2020.

The Race Is Nearly Over When They Take To The Water

As usual, the outcome boiled down to the simple fact that New Zealand’s boat was quicker.

“At times,” Jimmy Spithill, the co-helmsman for the Italians, told the New York Times, “it felt we were taking a knife to a gunfight.”

Already a leading UK journalist has challenged the fairness of Team New Zealand’s America’s Cup victory. They had the home-court advantage. The race was held in Waitemata Harbour, New Zealand. But they also had other key advantages — namely setting the class rules, a right reserved to the defending champions.

“There is a reason the America’s Cup has been won by the defenders 30 times in 36 Cups. The odds are generally stacked in their favour, certainly if they choose them to be,” Tom Cary wrote in The Telegraph. “New Zealand have been fair, but nevertheless, the defenders set the class rules – which in a brand new class is certainly an advantage.”

The America’s Cup is a match race between two sailing yachts — the defender (currently Emirates Team New Zealand) and the second yacht, known as the challenger. The rules for proposing a challenge are a bit convoluted. In the old days, a challenger would sail past the winner and toss a note of challenge onto the boat’s deck. Today the protocol is more formal but hints at the same tradition.

No home court advantage? No biggie when you’ve got a superhuman AI bot on your crew. 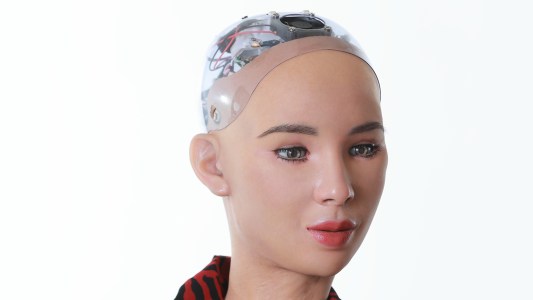 Sophia the robot has created digital art that will be linked to an NFT and sold — making her the latest to join the art world’s current craze.