Ukraine’s drone community is rallying behind its military, donating their consumer drones to the fight against the Russian invasion.

“Why are we doing this? We have no other choice. This is our land, our home,” Denys Sushko, head of operations at Kyiv-based drone manufactuer DroneUA, told AP News.

The need: Consumer drones don’t carry weapons, but most do come with camera systems and some are even equipped with night vision or heat-sensing tech — that can make them useful for military reconnaissance.

Choice clips of drone footage — like this one depicting the aftermath of Russia’s attack on Borodyanka — can also help Ukraine rally support from the world outside its borders.

“[Drone] video can be sent viral across YouTube or Instagram or Twitter — you name it,” ​​P.W. Singer, a political scientist and expert on modern warfare, told AP News.

The call to action: On February 25 — one day after Russia invaded Ukraine — Ukraine’s Ministry of Defense used a Facebook post to reach out to the nation’s drone community.

“Do you own a drone? Give it to experienced pilots to use!” it wrote. “Do you know how to drive a drone? Join the joint patrol with units 112 of the separate brigade of the city of Kyiv!”

“Kyiv needs you and your drone at this moment of fury!” it added.

The response: It’s hard to say exactly how many Ukranians have volunteered their drones so far, but at least one — Taras Troiak, a businessman who started a drone retailer in Kyiv — has donated approximately 100 drones to the cause.

“Civilian users, military users, everybody just started to use those drones to find some enemies in our country, and it’s helpful,” Troiak told AP News. “And I know many examples where it saved the life of our Ukrainian people.”

The danger: Flying a drone over Ukraine is risky right now — most of the drones in use are made by China’s DJI and include a technology called “AeroScope” that makes it possible to pinpoint the location of a drone’s operator.

“The risk to civilian drone operators inside Ukraine is still great,” Mike Monnik, an Australian drone security expert, told AP News. “Locating the operator’s location could result in directed missile fire, given what we’ve seen in the fighting so far.”

Sushko, who has been lending his drone expertise to the Ukrainian military, said that he and other experts have been teaching civilian operators “tricks” to help them avoid detection.

“We try to use absolutely everything that can help protect our country, and drones are a great tool for getting real-time data,” he said. “Now in Ukraine no one remains indifferent. Everyone does what they can.” 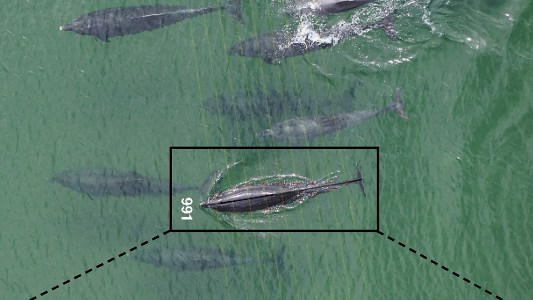 Using drone photography, University of Aberdeen researchers have been able to identify pregnant dolphins for the first time.

Drones
Pregnant dolphins identified by drones for the first time
Subscribe to Freethink for more great stories
Subscription Center
Challenges
Video
Freethink
Subscribe
We focus on solutions: the smartest people, the biggest ideas, and the most ground breaking technology shaping our future.
Subscribe