Fear is one of the brain’s most powerful tools for helping us avoid danger. The primal urge to run has spared countless people from deadly venom, sharp claws, and plummeting from sheer cliff faces. But despite the utility of fear, most of us fear something that, realistically, poses very little threat to us in everyday life.

The National Institute of Mental Health estimates that 12.5% of U.S. adults have had a specific phobia at some point in their lives, such as extreme fear of heights, spiders, or flying, each of which may affect approximately 6% of the population.

These fears are not only a source of stress and anxiety for the people who experience them, but they also can have society-wide impacts: For example, out of all New Zealanders who haven’t yet been vaccinated for COVID-19, some 10% blame a fear of needles for their hesitancy.

The challenge: Exposure therapy is a tried and tested technique for combatting phobias. By exposing patients to the source of their fear, and encouraging them to seek them out in everyday life, psychologists have discovered that patients’ symptoms can ease in a matter of weeks.

But despite its effectiveness, patients undergoing exposure therapy will often drop out of treatment, usually because they’re put off by the discomfort they experience, or they lack the motivation to seek out scary experiences.

The solution: A team of researchers in New Zealand has developed a promising alternative to traditional exposure therapy. Called oVRcome, the app has participants encounter virtual-reality (VR) representations of their fears on their smartphones, which are held in front of their eyes by a low-cost headset.

A similar approach has been tested by researchers in the Netherlands. This study showed promising signs of reducing participants’ fear of heights, but it involved expensive VR equipment that many people wouldn’t be able to afford.

In the new app, Cameron Lacey and colleagues at the University of Otago, Christchurch, included visual experiences of a wider variety of common phobias, including flying, needles, heights, spiders, and dogs.

oVRcome also includes sections that educated users about the psychological origins of their fear, in addition to offering relaxation and mindfulness exercises

The trial: To test oVRcome’s performance, Lacey’s team asked 126 participants suffering from any of the five phobias they included to try the app for six weeks and then report back over the next 12 weeks on how effectively it reduced their symptoms of fear.

Over 86% of the participants completed the trial and many showed promising psychological changes. On a scale widely used by psychologists to measure the severity of patient phobias, the researchers found that the fear felt by the average user reduced from “moderate to severe” to “minimal” after using the app.

Some users even reported concrete changes to their behavior in the weeks following the trial: One participant gained enough confidence to book flights to spend time with family abroad, while another was finally able to remove spiders from the house by themselves. Another participant overcame their fear of needles enough to book a COVID-19 vaccine.

The researchers attributed a variety of factors to the success of their approach over more traditional forms of exposure therapy. Perhaps most importantly, oVRcome gives its users more control over their own therapy, allowing them to turn down the severity of the VR images when they didn’t yet have the confidence to face them, and eventually ramp up the severity when they felt ready.

The app also lets its users control when and where exposure would occur. Rather than facing their fears in scheduled therapy sessions, or experiencing them in uncertain times and places in real life, participants could expose themselves to their phobias as and when was most comfortable for them.

Transforming exposure therapy: Through further research, Lacey’s team hopes that oVRcome could be expanded to cover an even wider range of common phobias.

Based on its early success, the researchers hope that their app could be released to the public in the near future – ultimately providing users with an easy and affordable way to tackle stress and anxiety on their terms, without any need for face-to-face sessions with a trained therapist.

Psychology
Widom of Daoism: why Yin-Yang is so much more than a tattoo
Yin-Yang symbolizes not a conflict or struggle but shows that nothing in life is solely either this or that. 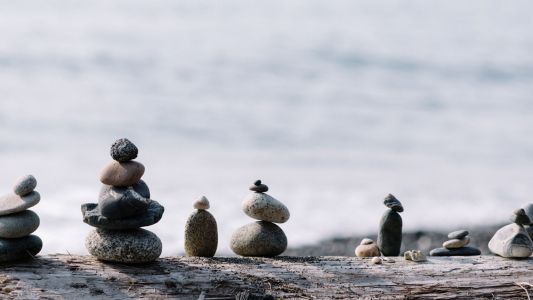 Buddhist psychologists, Robert Thurman and Sharon Salzberg, have identified “Four Enemies” that are obstacles to a happy, fulfilled life.

Psychology
The Four Enemies to a happy life and how to defeat them
Subscribe to Freethink for more great stories
Subscription Center
Challenges
Video
Freethink
Subscribe
We focus on solutions: the smartest people, the biggest ideas, and the most ground breaking technology shaping our future.
Subscribe