UK researchers are building a medical triage robot, controlled remotely by medics using VR, to attend to injured soldiers on the battlefield — potentially improving their chances of survival while protecting the lives of medics.

The challenge: If a soldier is injured on the battlefield, medical technicians will do their best to treat them using the limited resources available on the front lines. If the injury is serious, the soldier may be evacuated to a better-equipped facility, but that can take days or even weeks.

The intrinsic risks to battlefield medicine are high. Medics may have to put their own lives at risk to reach the injured soldier. Meanwhile, the soldier’s care is limited to the skills of whichever technician, if any, happens to be nearby.

The idea: University of Sheffield researchers are now developing a medical triage robot for the UK government. This robot, dubbed the Medical Telexistence Platform (MediTel), will be controlled remotely by a trained medic using a VR headset.

“MediTel will reduce the risk to medical personnel by limiting their exposure to potential hazards while providing an improved chance of survival for the casualty,” said project co-leader David King.

Building the bot: Sanja Dogramadzi, the other co-leader on the MediTel project, told The Engineer that the team plans to use a commercial unmanned ground vehicle capable of traversing relatively rough terrain as the base for the medical triage robot.

They’ll add a camera that provides a 360-degree view of the robot’s surroundings, as well as two arms equipped with additional smaller cameras. One of the robot’s arms will have a custom-built gripper that allows it to handle smaller objects with extra dexterity.

The robot will need to provide the tech with real-time visual feedback.

MediTel will use GPS to reach soldiers in need of care. Camera data will then be sent via a 5G connection (if available) to a medic observing the situation with a commercial VR headset.

Depending on the soldier’s injury, the medic can then guide the robot through the process of measuring their pulse, temperature, and blood pressure, as well as collecting mouth swabs and blood samples.

The demo: According to the terms of the funding, the medical triage robot needs to be ready for a live demo by April 2023.

During the demo, it will simulate helping a medical tech treat a casualty in a high-risk contagious disease area. The robot will need to provide the tech with real-time visual feedback of a dummy patient, monitor their vitals, collect blood and cheek swabs, and more.

The big picture: It seems MediTel is being designed to work mostly as an assistant to a nearby medic, meaning it wouldn’t keep them entirely out of harm’s way. The plan to eventually incorporate advanced robotic surgery tech into the system could potentially allow immediate treatment in a way that wouldn’t be possible otherwise, though.

“Our platform uses the latest technology and would integrate it in a way that hasn’t been done before,” said Dogramadzi. “We are excited to lead on this research and share how the technology could be used in active service.” 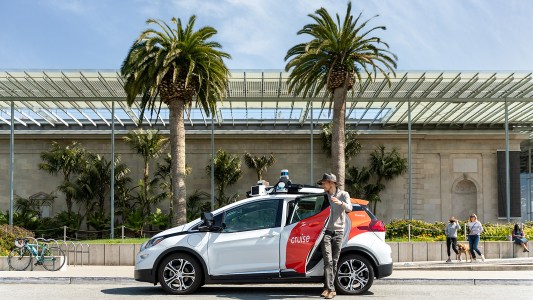 General Motors subsidiary Cruise is quickly expanding its commercial robotaxi service to more cities in the US.