Remnants of Hurricane Ida dumped a disastrous amount of rain on New York City, forcing many sections of the MTA’s subways and commuter rail to shut down. More than a dozen trains had to be evacuated — revealing exactly how vulnerable the system is.

But with climate change promising more extreme weather and coastal sea-level rise, can the subway be flood-proofed?

The problem: It doesn’t take a hurricane to flood New York’s subway system. On an average dry day, according to the MTA, 13 million gallons of water are pumped out of the 472-station subway system, the New York Times reports. And they spend $20 million each year on water mitigation efforts, like replacing pumps.

A 2017 subway action plan earmarked $130 million of MTA spending to fix water issues, and $2.6 billion has been allocated to resiliency projects since 2012 (post-Hurricane Sandy), the NYT reported in July.

It has been almost a decade since Hurricane Sandy inundated the system. But despite the preparation time and upgrades, things are likely to worsen as climate change brings more extreme weather and torrential rains. One would think that the city would have been more prepared for Ida, but it is easier said than done.

New York, meanwhile, has already invested millions on solutions such as retractable stairwell covers (to block rain from draining into the tunnels) and passive automatic shutters, which isolate sections of subway tunnels that are flooded, as Popular Mechanics reported in 2016.

In 2019, a New Yorker tweeted an ominous photo of a subway entrance brimming with water. Oddly, the photo was taken on a beautiful sunny day. MTA replied with a cheeky, “We’re pivoting to submarines,” before explaining that they were testing a flex gate — a flexible fabric cover to position over stairways to seal off entrances to the subway tunnels. They are made by ILC-Dover, a Delaware-based company, and can hold back 16 feet of water.

“We’re doing this because climate change is real,” they tweeted.

They installed about 70 such flex gates in subway and PATH stations located near the coast in flood zones. The Stairwell Flex-Gate is also currently installed in lower Manhattan in areas likely to be impacted by storm surge flooding. But water from a storm surge enters the tunnels differently than water from heavy rain and flash flooding. Blocking storm surge water in coastal zones, doesn’t necessarily block flash flood water which can occur at higher elevations. Additionally, the flex gates aren’t optimal for protecting against flash floods as they take several minutes to deploy, an MTA representative told City Limits.

Thursday night, Mayor Bill de Blasio acknowledged that they could have better prepared for the catastrophic storm.

“It’s not just coastal resiliency, it’s now about vulnerability of higher elevations where the drainage infrastructure is insufficient to withstand these kinds of extremes,” he said. “Remember, the subway is not a submarine, there’s water coming from directions and all penetrations, we have to plan for it.”

ILC-Dover was reportedly working on a “resilient subway tunnel plug” with the Transportation Security Administration (TSA). It is a big air balloon housed in a subway tunnel that instantly inflates in the case of a flood, sealing off flooding until the pumps can get a handle on it.

“Millions of New Yorkers depend on a reliable subway trip every single day no matter the weather,” Danny Pearlstein, a spokesman for the Riders Alliance, a consumer advocacy group, told the NYT. “Fording a river should not be part of the New York commute.”

What else can New York do to flood-proof the subway system?

Overseas solutions: New York isn’t alone. Subway systems around the world are experiencing more floods. On a single day in July, Zhengzhou, China, received about a year’s worth of precipitation, killing 13 people trapped in a subway.

Most of the New York City subway system was built over a century ago — long before anyone was thinking about climate change, sea-level rise, and catastrophic storms.

“Older systems were designed for the climate of the past,” Tina Hodges, a former analyst at the Federal Transit Administration, told NPR.

In 2011, Hodges wrote a report about climate risks to public transit in the U.S. “In the Northeastern United States, which is home to some of the oldest and largest transit systems in the country, there’s already been a 67% increase in the heaviest precipitation.”

But newer systems in Asia, built with flooding in mind, can be a model for protecting subways from future flooding. According to NPR, researchers in Kyoto, Japan, created a full-scale model of a subway station escalator so they could simulate flash floods and determine emergency plans. Tokyo installed sliding doors able to withstand the pressure from floodwaters. And in Taipei, Taiwan, authorities built raised subway station entrances to keep out floodwaters from the commonly occurring cyclones.

New designs, bigger pipes, and more nature: Klaus Hans Jacob, a seismologist at Columbia University’s Earth Institute, told City Limits that the city needs to reduce sewer system overflows that allow water to gather on the streets, backing up into subway entrances. He suggests elevated entrances to the stations, like those in Taiwan, where riders walk up a few steps before descending into the tunnel.

In an interview with The Conversation, Jacob pointed out the problem of an uneven amount of rainfall going into the tunnels via a mismatch of entrances — pedestrian entrances, ventilation grates, train tunnels, etc. With Hurricane Sandy-type coastal storm surges, water fills the system from the bottom up. But with a storm like Hurricane Ida, even tunnels at higher elevations can flood.

“Avoiding street flooding can be achieved through increasing the capacity of street gutters and the sewer system to take up the runoff water from streets. This can be done by widening or adding new gutters, but also by having larger-diameter sewer pipes in the roads,” Jacob said.

Despite the best innovations and engineering, Jacob still suggests something simple — let nature do the work. Plant more trees. Doing so would make the ground more absorbent and decrease runoff. And individuals can help by putting up rooftop gardens, which can temporarily store some water and slow runoff.

Weaving more nature into the landscape may seem like an idealized solution, but it can be practical, too. Architecture critic, Justin Davidson expands on this idea by suggesting that we design streets to soak up rainwater instead of letting it pool in low areas. Roads that can absorb rainwater will allow it to drain away slowly, instead of pooling then flooding into the subway tunnels. Also, installing more “bioswales” — landscape depressions with vegetation — can soak up water and filter out pollutants as it trickles through.

“More than seven inches of rain fell in Central Park during Ida’s passage, and by next morning the ground was squishy but mostly un-waterlogged,” Davidson wrote.

Despite the challenges, cities across America are considering plans to build new subway tunnels because of the benefits of a low-cost mass transit system. But, if the system is designed to last — they need to consider how the world will look decades from now.

MTA has launched some projects to mitigate the problems from floodwaters — like elevating electrical cables and building a perimeter wall around the Coney Island Yard, which serves six subway lines. But Jacob says sufficient mitigation measures would be pricey and worth the investment. 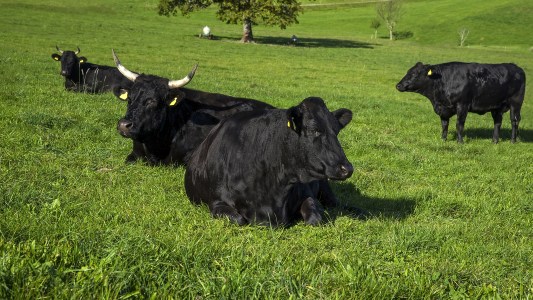 Japanese researchers have created a morsel of lab-grown beef with the distinct marbling of fat found in Wagyu steaks.