Researchers have long assumed that the Amazon river basin, which includes the modern-day countries of Peru, Colombia and Bolivia, did not become densely populated until after the arrival of Spanish colonizers in the late 15th century. This assumption was based on the simple fact that the land surrounding the basin experiences severe flooding during rainy seasons, making permanent settlement without the aid of advanced technology all but impossible.

One of the few skeptics was Heiko Prümers, an archaeologist with a focus on Latin America who teaches at the University of Bonn. Over 20 years ago, he set out with his colleague Carla Jaimes Betancourt — then a student studying in La Paz — to investigate two mounds located near the village of Casarabe in northern Bolivia. The mounds, a university press release recalls, “turned out to be eroded pyramid stumps and platform buildings.” In other words: evidence of settlement.

Subsequent studies confirmed Prümers’ suspicion. Bioarchaeological analysis showed that these buildings were not unoccupied ceremonial sites. Instead, they were used year-round by a community that farmed, fished, and hunted for food. These agriculturalists, named the Casarabe culture, could be found throughout northern Bolivia during the Late Holocene epoch. Their home turf was the Llanos de Mojos, a tropical savannah that spans more than 4,500 square km.

Over the years, we have learned a lot about the Casarabe culture. We know they engaged in agriculture as well as aquaculture, and used water-control systems to protect themselves from the Amazon basin. We also know that their society had a surprisingly complex sociopolitical organization, with trade flowing back and forth between economic bases. They not only made mounds, but also dug canals, ditches, and causeways.

This information was gathered from dozens of archaeological sites, many of which were separated by more than 1,000 kilometers. When studying an ancient civilization as dispersed as the Casarabe culture, it can be difficult to visualize how individual settlements are related to each other in three-dimensional space — and that’s especially true for a landscape as untamed and inaccessible as the Amazon river basin.

Lacking the logistical resources necessary to traverse the Llanos de Mojos on foot, Prümers and Betancourt decided they would try to create a map of the Casarabe culture using light detection and ranging technology. This technology, better known as lidar, previously helped archaeologists get a clearer picture of Olmec and Mayan urban planning in Mesoamerica. Prümers’ team surveyed an area of 204 square km, concentrating on major excavation sites.

The lidar scans mapped out a total of 26 Casarabe settlements, 15 of which were already known to exist. The researchers then organized the settlements into five distinct categories, based on the dimensions of their architecture, the scale of water management infrastructure, and the number of causeways leading to and from the sites, among other factors.

Two settlements were considerably larger than the others and likely acted as both cultural and economic centers. Named Cotoca and Landíva, they span more than 100 hectares and are surrounded by moats and ramparts. “At the Cotoca site,” Prümers’ research paper reports, “the inner defensive structures are only preserved in some sections, which may suggest that when the site grew, ramparts were adapted accordingly.”

Both Cotoca and Landíva were constructed around large complexes of civic and ceremonial architecture. Lidar scans revealed that these complexes were built to face north-northwest. This, according to the paper, probably reflects an as of yet unknown cosmological view that might also be present in the uniform orientation of the Casarabe culture’s burial mounds. Certainly, this practice would be consistent with other pre-Columbian civilizations, including the Mayans and Olmecs.

Settlements in the second category were significantly smaller in size, with areas ranging between 21 and 41 hectares. These so-called secondary sites also feature civic-ceremonial architecture built upon base platforms. Settlements belonging to the third and fourth categories are smaller still, spanning 2.5 and 0.34 hectares, respectively. The fifth category is a hypothetical one, containing settlements without mounded architecture that could not be detected by lidar.

As expected, lidar revealed a lot about Casarabe urban planning. Most settlements seem to have been built within 10 km of each other. The eastern region of the Llanos de Mojos is significantly denser than the other regions, with the average distance between settlements dropping to between roughly 1.8 and 4.0 km. Most settlements were organized in clusters of 100-500 square km and connected via causeways and canals.

Unsurprisingly, the highest number of waterworks are found around Cotoca and Landíva. From Cotoca, specifically, canals radiate “in all of the cardinal connections, connecting with lower-tier sites, the Ibare River to the south, and lakes to the east.” One of these canals, which leads to Laguna San José, is more than 7 km in length. This impressive feat of engineering underscores the importance of Cotoca, which served as the center of an area of 500 square km.

More than 20 years following their initial investigations, Prümers and Betancourt have challenged everything the academic community thought it knew about pre-Columbian life in the Amazon river basin. “At the regional level,” their study, published in May, concludes, “the lidar data combined with previous archaeological-reconnaissance and remote-sensing data show that the Casarabe culture has a highly integrated, continuous and dense settlement system.”

The Casarabe culture occupies a special place in the history of archaeological excavations in Latin America. While major pre-Columbian settlements like Cotoca and Landíva are not unique, the same cannot be said for the many smaller settlements the lidar scans brought into view. According to Prümers and Betancourt’s study, these places represent “the first known case [of low-density urbanization] for the entire tropical lowlands of South America.”

The largest Amazon settlements also compare favorably to other ancient cities found in South America. That is to say, they are of a much larger scale than the settlements built along the Andes mountains as well as southern Amazonia in general. Indeed, the architecture found in both Cotoca and Landíva may well have required the greatest amount of skilled labor of any construction from the same time period in the entire continent. 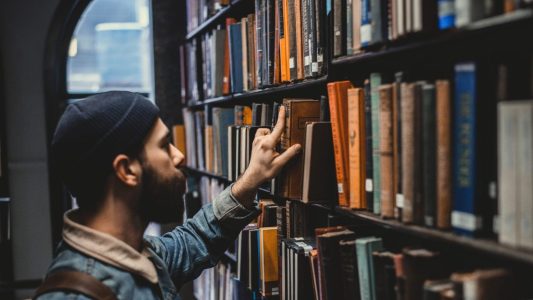 Books
How to be happy: Aristotle’s 11 guidelines for a good life
By Scotty Hendricks
Subscribe to Freethink for more great stories
Subscription Center
Sections
Video
Freethink
Subscribe
We focus on solutions: the smartest people, the biggest ideas, and the most ground breaking technology shaping our future.
Subscribe