The discolorations of Michelangelo’s marble were, in effect, a very long revenge; weeping and blooming like stubborn wounds on the sarcophagus, they stemmed from a body unceremoniously dumped within and never properly eviscerated.

Lured by the promise of an encounter with a beautiful widow, Duke Alessandro Medici was set upon by his cousin — “bad Lorenzo” — and a hired killer, who stabbed him to death. After his assassination, the erstwhile ruler of Florence was apparently just dropped into his father’s tomb.

He could be seen there upon it centuries later, seeping into the masterpiece.

But, as the New York Times’ Jason Horowitz reports, even this ghostly remnant of the Medici’s dark past of daggers, princes, and popes was no match for our most ardent art restorers: bacteria.

The dirty chapel: The Medici family ruled Florence and the church, a banking-backed hegemony lasting centuries that patronized the Renaissance. Such a powerful family warranted a powerful place to lay to rest, and the Medici Chapel was commissioned to no less than Michelangelo, whose sculptures adorn the sarcophagi.

According to Horowitz, the cleaning of the grime and the persistent, MacBeth-like stains in the Medici Chapel began pre-COVID. In November 2019, Italy’s National Research Council figured out what was behind the grime.

Anna Rosa Sprocati, a biologist at the Italian National Agency for New Technologies, picked from her catalogue of over 1,000 bacteria to test against the stains. Some ate the grime — and also the marble Michelangelo used.

“We didn’t pick those,” she told Horowitz.

Sprocati’s team took the eight most promising bacteria and tested them on a gridded sample section behind the altar.

The winners began their dirty work on the tomb of Giuliano di Lorenzo, Duke of Nemours. Gracing the Duke’s tomb are personifications of Night and Day. They successfully washed Night’s hair and ears with bacteria.

Work stopped until mid-October of 2020, when the team returned and turned loose a bacterium called Serratia ficaria SH7 on the tomb Alessandro was staining. Isolated from soil contaminated by heavy metals, SH7 devoured the residues staining the sarcophagus.

From oil spills to oil paint: As The Verge’s Mary Beth Griggs reports, this isn’t the first time bacteria have become the world’s smallest art restorers. (Some don’t even need to be drafted; they make their home in the pigments and help prevent paintings from deteriorating to begin with.)

A fresco on a cathedral dome in Pisa and a cemetery close to the Leaning Tower were cleaned by bacteria that eat pollutants.

The strains Sprocati started with to clean the Duke’s tomb usually work in environmental cleanup, eating oils in spills and detoxifying heavy metals.

“The microbes did a spectacular job of eating a lot of the natural gas,” biogeochemist Chris Reddy told Scientific American. “The rate and capacity is a mind-boggling testament to microbes.”

The Medici Chapel’s bacterial army did its job, Horowitz reports; “tourists admired the downward pensive glance of Michelangelo’s bearded Dusk, the rising of his groggy Dawn and Lorenzo’s tomb, now rid of the remnants of Alessandro.” 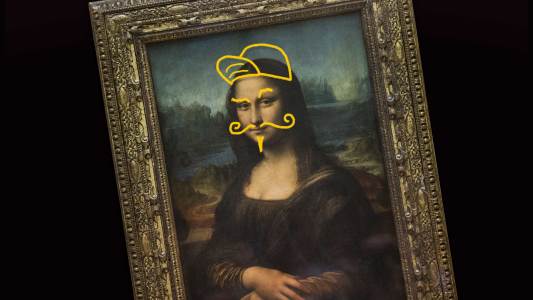 Museum Hack is reimagining museum tours as we know them, by delivering storylines about art, culture, and history in a way that’s interactive — and highly entertaining.