Google career certificates are no longer just an alternative to college — they’re also now a way for college students to boost their earning potential, while lowering the cost of obtaining a degree.

The challenge: On average, people with bachelor’s degrees earn $27,000 more per year than people whose highest level of education is a high school diploma.

However, students can expect to spend thousands or tens of thousands of dollars per year earning their degrees through a traditional four-year program, and about two-thirds of students end up taking out loans to help pay that cost.

Those students graduate owing nearly $30,000, which cuts into any increased earnings their degree has landed them. The situation is even worse for the millions of students who take out loans and don’t finish school, since most of the earnings boost from college comes from graduating.

Universities recognizing the value of education outside the mainstream of higher ed would be a radical shift.

Google career certificates: In August 2020, Google announced a career certificates program that could help people without a college degree further their education — and boost their salaries — without taking on a mountain of debt.

Each of the Google career certificates trains students in a high-demand field — information technology, data analytics, project management, or user experience (UX) design — that has a median annual salary of at least $66,000.

The curriculum — designed and delivered by Google employees — is hosted on the online learning platform Coursera, which charges $39 per month. Each Google career certificate takes three to six months to complete.

A new certificate program alone isn’t enough to disrupt higher education, if employers still prefer a bachelor’s degree, but Google said it would treat these certificates as equivalent to four-year degrees when hiring for relevant positions.

It also announced a list of partner companies committed to considering certificate holders for jobs.

What’s new: In October, Google announced that the American Council on Education recommended that schools also treat the certificates as being equivalent to 12 college credits. Several universities — including Northeastern, SUNY, and every state school in Connecticut — have agreed to accept those credit recommendations.

Google also announced that it was making the career certificates available for free to all community colleges and career and technical education high schools (or trade schools), giving them a chance to integrate the curriculum into their existing programs.

Why it matters: Colleges giving credit to Google’s courses is a big deal.

The average cost for 12 credits at a public university is $3,744, while the Google career certificates cost less than $240. That makes them potentially a much cheaper way for students to obtain the credits they need to graduate (assuming they attend a school that recognizes the certificates).

By pairing a traditional degree with one of the Google career certificates, graduates may increase their earning potential, too, according to Google.

“For example, a psychology major who acquires data analysis skills can unlock more than 100,000 additional entry-level jobs paying on average $60,000, versus $39,000 for psychology majors overall,” it wrote in the announcement.

Beyond that, universities recognizing the value of education outside the mainstream of higher ed would be a radical shift. It could herald a world where education and training are increasingly created outside the standard model, while finally being valued and recognized by both employers and traditional schools. 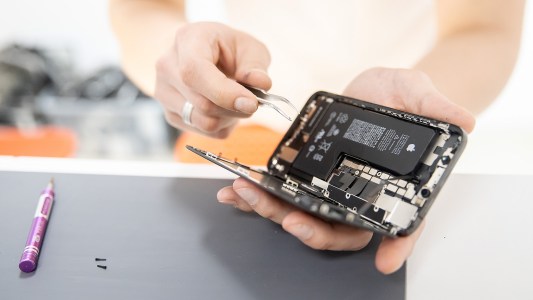 In a reversal of its previous stance on the right to repair, Apple is now giving customers access to parts and tools for DIY repairs.

DIY
Apple finally agrees you have a right to repair its tech
Subscribe to Freethink for more great stories
Subscription Center
Sections
Video
Freethink
Subscribe
We focus on solutions: the smartest people, the biggest ideas, and the most ground breaking technology shaping our future.
Subscribe