This March, The Atlantic posed a simple but provocative question: ​​what will pandemic nostalgia feel like? Four months later, vaccination rates have increased from 20% to 55%, and with them, in-person social commitments and commutes to the office have returned.

The increased pace has prompted some to yearn for the “quieter times” of quarantine — largely discounting the stress and trauma that was present at the time.

What gives? How (and why) does this happen? Jason Feifer, Editor-in-Chief of Entrepreneur Magazine and the host of the podcast Build for Tomorrow, decided to find out.

What he discovers is that this phenomenon of being nostalgic for things even when they weren’t actually positive experiences at the time — of remembering these times as “better” than they were — is common. Moreover, it gives crucial insight into the unexpected ways that our memories work.

You are an unreliable narrator…

First, it’s important to understand what memories are and why they’re fundamentally unreliable. As podcast guest and Duke professor of cognitive neuroscience Felipe De Brigard explains: “Memory is not a faculty that attempts to reproduce with fidelity what happened in the past.”

This has to do with the sheer volume of information that passes through our senses. It would be impossible for our brains to objectively hold these details the way we might hope a hard drive does. Instead, our brains store bits and pieces of memories. Feifer explains it with the example of remembering a vacation a year later.

“You’re not remembering the vacation in full,” Feifer says. “What you’re doing is: your brain is literally reassembling those bits and pieces into a coherent narrative for you at the time. It’s not stored, it is reassembled every time.”

De Brigard uses the example of a paleontological dig, where, instead of finding an actual dinosaur bone, what you’re finding is a jumble of fossilized parts — with an unknown number broken or missing.

“You don’t have all the pieces of the fossil,” De Brigard says. “So you have to make use of other kinds of information to complete the fossil of the dinosaur or whatever, right?”

And how do our brains do that? They fill in the gaps with imagination. In other words, we make our memories up anew every time we remember them.

De Brigard says that memory’s function isn’t just to bring mental representations of the past to the present, but to actually use these memories to help us in the present — to provide instruction or to strengthen bonds with friends through reminiscing.

From a practical standpoint, memory is meant to be good — or at least productive — and this is where our unreliable minds start to make a bit more sense.

If the goal of memory is to promote learning and bonding, then there’s less of a biological incentive to retain every single painful detail of an experience that we’ve already learned from. In fact, there’s an incentive not to remember these details. When we do, it manifests in reliving trauma, which occurs in conditions like post-traumatic stress disorder (PTSD).

These memories are no longer “useful” to us — and in fact can be incredibly harmful — so speaking generally, from a biological standpoint, it makes way more sense for our minds to try to “move on.” You cannot change what objectively happened in the past — but your brain can edit the memory so that the traumatic details recede.

“Memory and imagination are profoundly intertwined.”

“You can combine imaginations like parts of the past events that didn’t happen and you can sort of contaminate your regional memory with bits and pieces of information that are not from the original event, but that had been sort of incorporated in the process of contamination,” De Brigard says. “And then at the time of retrieval, then you amplify them and then the good gets amplified.”

Nostalgia researchers like De Brigard have a name for this: fading affect bias.

…But you are still the main character of your story

Most of the time, our minds are working to protect us from pain that won’t serve us, but there’s one important way they function that seems like the exact opposite.

Feifer interviews social psychology professor at Wilfrid Laurier University Anne Wilson, who explains that we have a tendency to remember the past poorly when it comes to establishing our personal narratives.

“The way that I talk about identity, when we’re thinking about personal identity, is that who we are in the moment is shaped by what we recall about the past and the stories that we tell — as well as about the ways that we imagine ourselves moving forward in the future,” Wilson says. “In a lot of cases, we actually recall the past is worse than it was when it comes to our own personal identity, because we like to see ourselves as continually improving over time.”

This stitching together of memories into a personal narrative is called “episodic memory,” and Wilson says that, to the best of our knowledge, humans are the only creatures on earth with this kind of memory. We draw on episodic memory in the present to understand who we are relative to everyone else at a given moment. But we’re dynamic creatures; who we were ten years ago isn’t the same as who we are today.

“It may be that part of the reason that our memory for the past is so imperfect is because it needs to be malleable,” Wilson says. “Because if it’s malleable, then it allows us to creatively use those same building blocks and reshape them into this future that we want to be able to imagine.”

This has important implications for how our brains propel us into the future.

“If the future is the only thing that really matters, then we need maximum flexibility to shape it,” Feifer says. “Biologically speaking, it wouldn’t make sense for our brains to completely limit future options based on past experiences. We would never learn anything, we’d never take a risk. We would never say, ‘I failed 10 times before, but this time it’s going to work.’ We need this flexibility.”

This drive toward a positive future gets reflected in our memories of the past, in a sneakily powerful way. Our minds highlight our perceived growth, improvement, or change — at the expense of objective recollection of the experience.

“When people think about themselves over time, they think about this positive march forward into a continually improving self,” Wilson says. “Yet when people think about specific discrete memories from the past, they often do recall those past memories very positively. So the narrative itself gets overlaid on top of the memory and it can often get harder and harder then to actually remember what was the original story, and what was the slightly shifted version of that over time.”

So, paradoxically, your brain will both misremember times as better and worse than they were, in order to serve different aspects of your identity. This is why, Wilson explains, nostalgia — even with regard to a generational pandemic — can actually be a tool used in the present to generate optimism about the future.

“If people dip into positive past memories, say of spending time with loved ones at a time when they can’t be with loved ones in the present, that can often just be a little bit of a mood booster, it can make them feel better about where they’re at in the moment, because they at least get some of those positives from that,” Wilson says. “There’s research that shows that the more people dip into nostalgic memories at the right times, the more they often feel energized and hopeful about the future.” 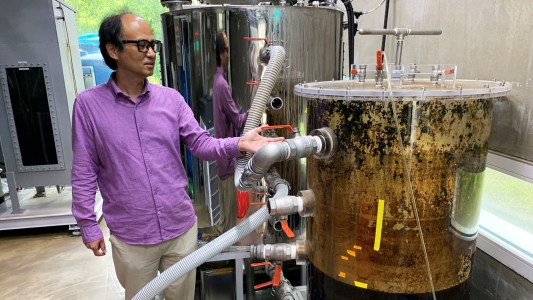 The BeeVi eco-toilet turns human waste into energy – and pays for the privilege.

Blockchain
This eco-toilet pays for human waste in digital currency
By Jesse Damiani
Subscribe to Freethink for more great stories
Subscription Center
Sections
Video
Freethink
Subscribe
We focus on solutions: the smartest people, the biggest ideas, and the most ground breaking technology shaping our future.
Subscribe