What Will Hunt finds underground is more than just bat-eating centipedes and eyeless, deathly pale salamanders. In the dark, he finds an allure, a place that is both sacred and scientific.

In his book Underground, the journalist and “urban explorer” details his expeditions through caves, mines, tunnels, catacombs, and sewer systems around the world. He has been probing beneath the surface since age 16, when he discovered an abandoned train tunnel in his neighborhood of Providence, Rhode Island.

For Hunt, the experience was like something out of The Lion, The Witch, and The Wardrobe — crossing a threshold into a hidden world.

While outer space and the deep ocean naturally fascinate us, with their intriguing inaccessibility and alienness, there is another world just as rich in mystery that is closer than most of us realize.

“Wherever you go in the world, there’s going to be something strange and beautiful beneath your feet,” Hunt says. Below the surface, there are insights to be gained about both society and our natural world: archeological treasures, fantastic creatures of the forever-night, the infrastructure on which cities run.

When Hunt moved from Rhode Island to New York, he found an entire culture of these urban explorers, people who had made a lifestyle out of plumbing the depths of the city. They explored underground spaces, documented them, threw parties in them, interacted with them in interesting ways.

Walking with an urban explorer would change Hunt’s view of the city around him; above ground, it was like seeing through x-ray goggles.

“I absolutely fell in love with them,” Hunt says. “I love that they had this completely unique relationship with the city.” They knew New York with an intimacy impossible to foster without being willing to descend, earning the right to share in the city’s secrets and spirit.

Cold, dark, and often undisturbed for long periods of time, the underground is like a time machine, Hunt says. Artifacts and artwork flesh out cultures long-gone, while yellowing newspapers, stuffed into crevices below Manhattan, are like tiny, crumpled time capsules.

The knowledge waiting beneath our feet can span millennia, with implications that are immediate: climate scientists use samples from stalactites and stalagmites to learn about the ancient environment. Total blackness helps us study vision and perception, and the planet’s thick walls keep physicists’ detectors screened from cosmic rays and radiation.

“The spaces beneath our feet are like this repository for our knowledge of how the Earth was before,” he says. “It’s intellectually important and spiritually important.”

Astrobiologists study the bizarre and hardy microbial life underground — which may hold the secrets to how life first formed and serve as models for what we may find on other planets and moons. (Hunt considers this “the most exciting frontier in subterranean science.”)

The spiritual element may be the most fascinating of all. For a species so deeply splintered, the catholic nature of human habitation in caves is striking.

“The archaeological record reveals that it was universal throughout the history of humanity,” Hunt says. “That is, the impulse to leave earthly reality and make contact with a spiritual otherworld.”

In their strange, unique beauty and singular ecosystems, caves are ripe for the uncanny experiences that humans, for whatever reason, seem to crave. This desire goes beyond the mystical, Hunt says: in a more secular world, to enter a cave is still akin to stepping into a holy place.

“People, when they step into a cave, they innately have the impulse to drop their voice to a whisper,” Hunt says. Even tourists fall into a kind of hush.

For modern stygian wanderers, the netherworld’s allure is, more than religious awe, a spirit of curiosity. Spelunkers, urban explorers, rock climbers, scuba divers: all are seeking discovery and an encounter with sublime beauty in inherently hostile environments.

The well-heeled sewer tourists of Victorian Paris have given way to the amateur catacomb lovers who roam beneath the old city today. The tunnels of New York now host a legion of abandoned subway station hunters, artists, and even colonies of people.

All see the world with a different perspective, a perspective that has beguiled Hunt since that train tunnel in Providence.

“It’s much bigger than holes in the ground,” Hunt says. “I’m not doing this to try to convince people to crawl down into holes. It’s more a way of trying to show people that the world is bigger and stranger and more mysterious and more magical than you would ever expect.”

Eventually, we too will become part of the chthonic canon, a layer which will be discovered, studied, and lived atop of.

“Our society will leave behind a stratum in the geological record,” Hunt says. “It’ll be a narrow band of plastic and squashed cars, and we will become part of the underground to the future inhabitants of this Earth.” 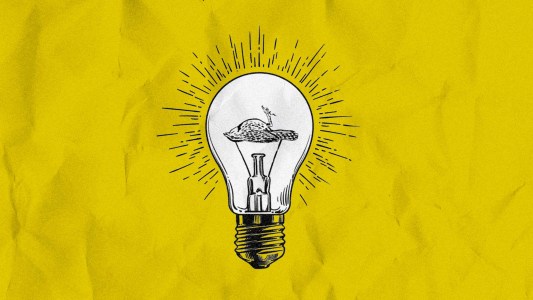 Bird populations are paying the price for our electric lights. These volunteers are working to change that.