Lindsay Jacks bends over and scoops the little corpse from the ground. It is an hour before sunrise, and Jacks can tell the bird died last night. Nearly all the birds she collects when she monitors the streets from 5 to 7 a.m. die at night. It is a popular time to fly during the fall migration season.

At first, Jacks thinks it might be a beheaded Flicker. Decapitated woodpeckers are a common occurrence near Baltimore’s Transamerica Building, thanks to the gruesome eating habits of the peregrine falcons nesting on the 33rd floor. But it is actually an American woodcock — a plump, brown mottled shorebird, with a long beak and short neck. Surely, it was migrating south.

“The woodcocks do a funny sky dance to attract mates,” she says, “and they have a long beak that can bend 90 degrees.”

Jacks is clearly enthusiastic about birds. She had been birding for a decade when she read an article about how birds are impacted by light pollution. Now, she is the volunteer director of Baltimore’s Lights Out chapter.

She found the body lying next to the Transamerica Building, where it likely struck the 40-story, 528-foot skyscraper. But the problem isn’t the building’s height: woodcocks, after all, only fly about 50 feet off the ground.

She places the bird in a ziplock baggie and hands it to Sam Young, a volunteer who also does the Friday morning walks. They will send it to one of two places. If it is fresh enough, Dr. Gianni Castiglione, a biologist at Johns Hopkins, may want it for his genetics studies. Given their size and metabolic needs, birds have a remarkably long lifespan. Castiglione hopes to use the birds and comparative genomics to find clues about the role of antioxidant genes in human disease.

If Castiglione doesn’t want the bird, Jacks will send it to Christina Gebhard, the bird collection manager at the Smithsonian National Museum of Natural History. The museum’s collection is the third biggest in the world. It houses over 600,000 birds, feathers, skins, and skeletons in rows and rows of cases. The collection helps researchers answer questions about everything from genetics to toxicology.

“Every bird has a story,” Gebhard says. “It is essentially a book, a historical record in time, that we are adding to our library.”

The woodcock’s story might help Jacks and Lights Out Baltimore save more birds. She found the body lying next to the Transamerica Building, where it likely struck the 40-story, 528-foot skyscraper. But the problem isn’t the building’s height: woodcocks, after all, only fly about 50 feet off the ground.

No one believes me when I tell them how many birds we find each year. But they aren’t walking downtown before the cleaning crew comes through each day.

At street level, the Transamerica Building is all glass. Lights shine through the windows, and trees reflect on the glass, giving the illusion that an open greenspace occupies the bottom level. The confused woodcock probably tried to fly through the illusionary greenspace, striking the building, and dying on contact. Lights Out Baltimore monitors 25 buildings for four months, each year, documenting over 400 bird deaths annually due to building strikes.

“No one believes me when I tell them how many birds we find each year,” she says. “But they aren’t walking downtown before the cleaning crew comes through each day.”

Ecologist Carrie Ann Adams, who doesn’t work with Lights Out, wouldn’t be surprised by the death toll. She says that migratory birds use light and natural cues, such as the sun, stars, and even the Earth’s magnetic field, to complete their yearly migration — and weather surveillance data show an increased concentration of birds in cities, where light pollution is highest.

On October 15, the world saw a dramatic example of this, when hundreds of chimney swifts flew into the glass windows of the NASCAR Hall of Fame. A video of the shocking aftermath, showing birds scattered on the ground, was widely shared on social media. (Many of them died, but the local bird rescue group Carolina Waterfowl Rescue was able to take over 300 survivors into rehab.)

Jacks (and Lights Out volunteers nationwide) count birds that fly into buildings in cities across the country. They use data they collect on their morning walks to advocate for the birds by talking with the managers of buildings that are at high risk for bird strikes. They hope to convince managers to douse their lights during the peak hours of migration season (hence the name of the group) or apply a bird-safe film to their windows. The film makes the windows visible to the birds, so they know to fly around it.

Scientists have noticed birds congregating around light sources since the 1800s, but they still don’t know exactly why they do this. Adams, the ecologist, has been documenting bird mortality due to light pollution to see if she can home in on why they are so drawn to lights. She says that programs like Lights Out could be an effective way to reduce bird mortality, because they offer real data, like counts of bird deaths before and after a building reduces their light pollution, as proof of the effectiveness of merely turning out the lights.

In downtown Baltimore, Jacks and Young weave between buildings, circling each one, and shining their flashlights into dark corners. When they approach a large building, they split, each taking a side and meeting up at the other end. When Young turns the corner, he sees a little brown bird lying on the sidewalk. He prepares a ziplock bag and puts on gloves. But when he reaches for the bird, it flutters its wings and makes a short flight, landing a few feet away.

The Lights Out protocol has provisions for injured birds. They catch them in a net, place them in a paper bag, and take them to a rehabilitation center. Once they recover, they are tagged and released. Many are then tracked by researchers at the Carnegie Museum to determine how collision birds fare after being released from rehab.

Citizen Scientists Are Collecting Data to Save Declining Bird Populations

In September, researchers released a report in the journal Science that disturbed scientists and conservationists across the country. Bird populations as a whole have fallen dramatically since 1970. Today, they estimate, there are about 2.9 billion fewer birds than 50 years ago, a nearly 30% decline. (Although the study did draw some criticism from scientists claiming that the data overstates dramatic declines from baseline population sizes. For example, the study included invasive species, which account for 15% of the loss and are something land managers actively try to reduce anyway). The study says it isn’t just the endangered bird populations like piping plovers that are declining. Abundant birds like sparrows are also dropping in numbers — like the swamp sparrow that Jacks now holds in her hands.

“This is my favorite ‘little brown job,'” she says, using a common expression among birders for small, nondescript brown birds. Young photographs the bird, then opens the iNaturalist app on his phone, where he logs the swamp sparrow’s location and the time it was found.

“Every bird has a story. It is essentially a book, a historical record in time, that we are adding to our library.”

“We’re directly rescuing birds and collecting data that otherwise would be swept into the trash,” Jacks says. “Not many people can say that. They can donate to (the National Audubon Society), but in this political climate of unrest, it is good to get out and do something.”

Many of the birds found by Lights Out are protected by the Migratory Bird Treaty Act, which makes it a crime to intentionally capture, kill, collect, or possess any migratory bird or its parts (such as eggs, nests, feathers, bones). In 2018, the Trump administration rolled back protections for birds killed predictably but “incidentally” in construction or industrial activities, but Lights Out, the Smithsonian, and other researchers still must obtain special permits from the U.S. Fish and Wildlife Service to collect dead birds. Any citizen scientist can use iNaturalist to log bird sightings, but they will need a permit to collect them.

“I’m just one person in this span of time preserving a collection for all time. This is documenting the world. You don’t have this, you have no idea what happened long ago,” she says.

Jacks and Young are almost finished with their route when they approach the National Aquarium on Baltimore’s waterfront. The tall building has an abundance of glass windows, jutting out at all angles. On one corner, a glass panel shoots off the building and reaches toward the sky: trees are visible through the glass.

Jacks said this corner used to be among the top five sites for finding dead birds in Baltimore, but they hadn’t found any here this year, ever since Lights Out worked with the aquarium to install a bird-friendly window film. The film’s dense dot pattern is enough to help the birds steer safely clear.

An aquarium manager approaches the building, a cup of coffee in hand. He knows Jacks and Young are scanning the area for dead or injured birds.

“Find any this morning?” he asks. 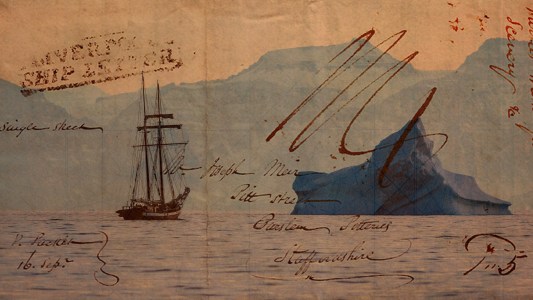 With the weather and ice data from old ship’s logs, Dr. Kevin Wood realized it was possible to reconstruct the history of sea ice in the Arctic to better understand climate change.