Now you can raise your own pet cheetah or African wild donkey — virtually.

Wildchain, a new smartphone game, will allow players to protect an endangered digital animal in the digital world while simultaneously protecting one in the real world. The game creators promise that nurturing your animal in the game, such as growing grasses or trees for them, will help their real-life counterpart.

Each player begins the game with a magic egg — which hatches a digital animal. The game mimics the real world by limiting or ‘endangering’ the number of virtual animals, pulling data from the International Union for Conservation of Nature (IUCN) Red List. For example, since there are only 6674 cheetahs left globally, only 6674 players will hatch a cheetah in the game. Each animal is associated with a block-chain-based token. The token acts as a digital certificate of authenticity, ensuring that your token matches up to a real-life endangered animal. This creates a scarcity of digital animals, which makes them more valuable.

“We use blockchain technology to create scarce digital assets, called non-fungible tokens. Each token is a digital representation of an animal living in the real world, one to one. For example, if there are 30 Vaquitas left in the world, there will also be 30 Vaquitas on our blockchain and in our game. We’re creating the most accurate data oracle of endangered species in the world and link that to our blockchain,” Florian Rehm, the director of Wildchain said in an email.

To earn points, players must nurture a proxy sanctuary for their digital animal, similar to the Tamagachi pets popular in the 90s. Both Tamagachi and Wildchain tasks players with feeding and caring for their pets. But by doing this in Wildchain, you’ll be helping protect a real conservation effort — actions in the game trigger real-world actions. Spend your money to plant a tree in the game, and Wildchain will transfer the money to underfunded wildlife conservation initiatives to plant a tree in real life.

If you think that ensuring the scarcity of a digital animal in a game is just a gimmick, think again. The digital collectible game could earn some cash for conservation. The recent surge in interest for crypto art shows that people will pay for rare digital assets — big time. One piece of art just sold for $70 million. In the last month, crypto artists, who make rare digital assets are making fortunes.

From idea to implementation, the entire effort has been crowdsourced: the idea, the game, and the conservation effort. The creators first proposed the game via UpLink, the World Economic Forum’s crowd-engagement platform that links innovators with sustainability experts to implement conservation ideas. Then, the team behind Wildchain went to Kickstarter to raise enough funds to get the ball rolling.In just three months, they are looking to you to play the game and support the conservation efforts.

Recently blockchain has come under fire for its considerable energy footprint. But there are different algorithms for blockchains. Bitcoin consumes a lot of energy because it uses an algorithm that requires a collective effort from many miners (people who are rewarded with bitcoin for completing transactions in the blockchain) — this is called a “proof-of-work” algorithm. This makes mining cryptocurrency difficult and the currency more valuable.

However “proof-of-stake” blockchains are systems that do not have the need for data miners, and therefore are not energy-intensive. Since Wildchain doesn’t need data miners, Rehm says Wildchain will be using a blockchain with low energy consumption. What’s more, Wildchain says that you can offset your carbon footprint by planting trees in the game. They will transfer funds to conservation initiatives that are doing the on-the-ground work, planting trees in real life.

In three months, the game will be available for free for anyone to download and play. Optional advertisements and in-app purchases (including rare eggs or animal adoptions) generate revenue to fund conservation efforts.

Some scientists say we are in the midst of the 6th mass extinction. The world has lost 160 species in the past decade. Fifteen species went extinct in 2020 alone. Could Wildchain motivate people to conserve wildlife? With the recent obsession for collecting limited digital assets, it just might work.

Editors note: This article has been updated from the original version. 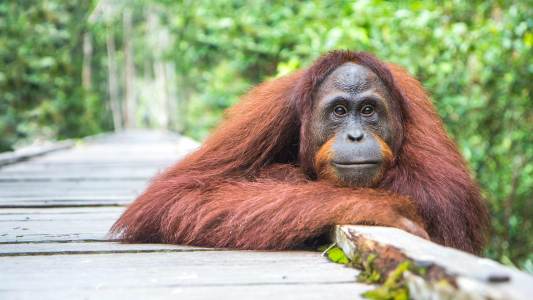 Great apes, our closest living relatives, are susceptible to COVID-19. The San Diego Zoo has given some an experimental vaccine to protect them.

Coronavirus
Great apes get vaccinated against COVID-19
By B. David Zarley
Subscribe to Freethink for more great stories
Subscription Center
Sections
Video
Freethink
Subscribe
We focus on solutions: the smartest people, the biggest ideas, and the most ground breaking technology shaping our future.
Subscribe