To combat the negative environmental impact of cow urine, researchers in Germany and New Zealand decided to try something radical: potty-training calves.

“It’s usually assumed that cattle are not capable of controlling defecation or urination,” co-author Jan Langbein said in a press release. “Cattle, like many other animals or farm animals are quite clever and they can learn a lot. Why shouldn’t they be able to learn how to use a toilet?”

The challenge: A single cow can produce about 8 gallons of urine every day. When you multiply that by the more than one billion cows roaming the planet, you get a lot of urine — and right now, there really isn’t a good place for it to go.

When cows are in pastures, their urine can contaminate water and soil and produce the highly potent greenhouse gas nitrous oxide. But if they’re confined to barns, cow urine mixes with the animals’ feces, producing ammonia, which can also affect air quality and water.

The MooLoo: To address this issue, the researchers wanted to see if it was possible to train cows to urinate in one specific spot.

They started their training by confining 16 calves in a latrine area (the “MooLoo”) and rewarding the animals with a snack every time they urinated. They then allowed the calves to roam in and out of the latrine.

“The cows are at least as quick to learn as two- to four-year-old children.”

At first, the calves kept going back to the latrine in the hope of getting a reward, but they soon learned a treat was only given if they urinated. To discourage urination outside the MooLoo, meanwhile, calves that had “accidents” would receive a mild spray of water.

The researchers worked with each of the calves for about 45 minutes every other day, and within a few weeks, 11 of the 16 animals were successfully trained to use the latrine.

“The cows are at least as good as children, age 2 to 4 years, at least as quick,” study senior author Lindsay Matthews told ABC News.

The next steps: Now that the researchers know cows can learn to urinate in dedicated areas, the next step is scaling up the training — and they’ve already identified two hurdles they’ll need to overcome to do that.

First, they’ll need to figure out how to automatically reward cows for urinating where they’re supposed to — some cow urine sensors in a latrine could help with that. They’ll also need to determine the ideal quantity of latrines based on farm size and where they should be located.

It’d likely be impossible to toilet-train every cow, but if even a fraction of the world’s cow urine was confined to latrines, it could have a significant environmental impact.

“If we could collect 10% or 20% of urinations, it would be sufficient to reduce greenhouse gas emissions and nitrate leaching significantly,” researcher Douglas Elliffe told Bloomberg. “We’ve shown proof of concept that we can train cows and train them easily.” 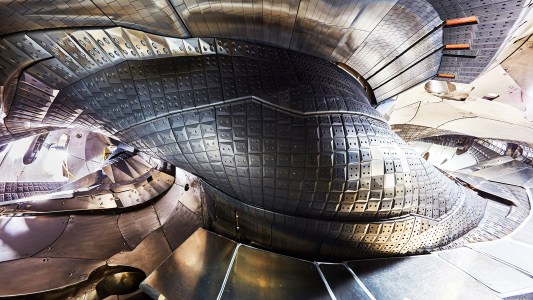 Physicists optimized a nuclear fusion reactor to overcome a problem that causes heat loss and prevents the device from sustaining fusion.

Clean Energy
Twisty nuclear fusion reactor gets twice as hot as the sun
Subscribe to Freethink for more great stories
Subscription Center
Sections
Video
Freethink
Subscribe
We focus on solutions: the smartest people, the biggest ideas, and the most ground breaking technology shaping our future.
Subscribe