Microsoft is striving to slash the environmental impact of its data centers — and part of that means exploring ways to decrease their water usage and even potentially building the facilities from algae bricks and mushroom tubes.

Data centers 101: Data centers are facilities where data is processed and stored on a type of computing system called a server. Companies like Microsoft, Google, and Amazon own and operate massive centers, some with tens of thousands of servers, and when we talk about data being “in the cloud,” it’s usually stored on the servers at one of these facilities.

The challenge: Data centers are hugely important to modern life — but they’re also energy intensive, consuming up to 50 times as much electricity per square foot as the average commercial building. And when that electricity comes from fossil fuels, it contributes to global warming.

A huge amount of energy comes from the need to keep the system from overheating. Data centers can blast the servers with air conditioning, but this isn’t very energy efficient. Another way is to use water.

However, data centers tend to be in arid areas, causing these drought-stricken communities to push back on the enormous amount of water being used on servers.

Going green: Because of the amount of data we generate, our reliance on data centers is only expected to increase in the future, so we need to look for ways to make these facilities more sustainable.

Microsoft — which expects to build 50 to 100 new data centers every year — is exploring creative ways to slash its centers’ environmental cost.  Noelle Walsh, Microsoft’s corporate VP of cloud ops and innovation, provided an update on that progress via a blog post on October 27.

What’s new? To decrease its carbon footprint, Microsoft plans to become carbon negative (take in more carbon than it emits) and water positive (replenish more water than it consumes) by 2030.

To move in that direction, the company has also set a goal to decrease water usage at its centers by 95% by 2024. It’s now announced that a new temperature management system that lets servers operate at higher temperatures will allow it to meet that goal.

The key to this new system is a higher “set point” — that’s the temperature at which a cooling system is triggered to start chilling the servers.

This system will be fully implemented by 2024 and will eliminate the need for water-cooling systems at centers in places with moderate temperatures, such as Chicago and Dublin, and reduce water usage by up to 60% in hotter places, such as Arizona.

The fringe ideas: Microsoft is also exploring more outside-the-box ways to increase the sustainability of its data centers by changing how they’re built.

It recently published a study on experimental construction materials that would allow the facilities’ walls to store carbon — those include “living bricks” grown from algae and structural tubes made from the mushroom component mycelium.

“Our goal in advanced development is to demonstrate that they are one-for-one replacements from a performance standpoint, and structural standpoint…and then start incorporating it and create that marketplace to get them out of lab scale into commercial scale,” she continued.

The big picture: Microsoft isn’t the only company with massive data centers, nor is it the only one trying to make them more sustainable.

“The tide is really turning on [the] sustainability of data centers.”

Google has implemented a system that automatically ensures non-essential tasks are processed using wind and solar power — and not carbon-emitting energy sources — by shifting the time of day they’re processed or even the center that does the processing.

Amazon, meanwhile, has increased its reliance on recycled wastewater to cool data centers, and in March, a data center owned by Apple was the first to meet water sustainability standards set by the international Alliance for Water Stewardship. 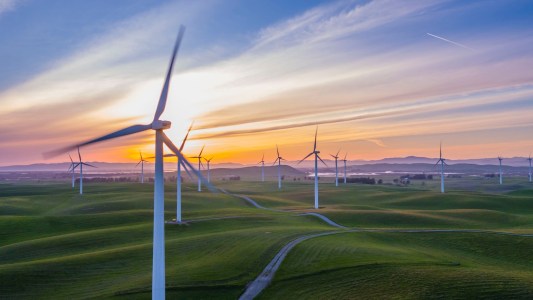 It’s estimated that 65% of emissions reductions can be achieved by existing technologies. The other 35% will need to come from tech breakthroughs.

Climate Crisis
Climate tech is booming — and this is better news than COP26
Subscribe to Freethink for more great stories
Subscription Center
Sections
Video
Freethink
Subscribe
We focus on solutions: the smartest people, the biggest ideas, and the most ground breaking technology shaping our future.
Subscribe