A desert locust swarm (about 40 million bugs) can eat as much food as 35,000 people in a single day — and right now, billions of locusts are devouring crops across East Africa and the Middle East as part of an outbreak the size of which the region hasn’t seen in decades.

Upwards of 25 million people in the region are already food insecure, and if something isn’t done to contain the outbreak, millions could starve — but NASA hopes to prevent that from happening.

The goal is to go early and destroy their nesting grounds.

For more than a decade, the agency has been providing developing nations with access to satellite data and various technologies through SERVIR, a joint venture with the U.S. Agency for International Development.

The purpose of SERVIR is to enable the nations to make more informed environmental decisions — and now, it’s working with the UN Food and Agriculture Organization (FAO) to help East Africa combat its locust problem by figuring out where a swarm will hatch before it happens.

A desert locust has three life stages: egg, hopper, and adult. Adult locusts can fly up to 90 miles in a single day, so once the insect reaches that stage, it becomes hard to predict where it might be from one day to the next.

The wings of a desert locust in the hopper stage are still developing, though, meaning a swarm of newborn locusts is stuck in the same general area where it hatched. Locusts that are still in the egg stage are, as you’d expect, even less mobile.

Researchers already know what kinds of environmental conditions locusts favor for their nesting grounds: warm, sandy soil that’s moist for 2 to 4 inches beneath the surface.

They also prefer spots with an abundance of nearby vegetation for the hoppers to eat since, again, they aren’t able to go far until their wings develop.

To predict where the next locust swarm might be born, SERVIR researchers are looking for places that meet those conditions.

To find areas with abundant healthy vegetation, they’re turning to the Moderate Resolution Imaging Spectroradiometer (MODIS) on NASA’s Terra satellite. This tool uses red and near-infrared light to determine the health of an area’s vegetation — the more light it reflects, the healthier the greenery.

To hunt down areas with the right amount of moisture, they’re looking at data collected by NASA’s Cyclone Global Navigation Satellite System, a fleet of eight micro-satellites that use a technique called “scatterometry” to measure land surface conditions.

“The data we have so far show a strong correlation between the location of sandy, moist soils and locust activity,” Ashutosh Limaye, NASA’s chief scientist for SERVIR, said in a statement. “Wherever there are moist, sandy locations, there are locusts banding or breeding.”

The SERVIR team is now refining its satellite data, and as Lee Ellenburg, SERVIR’s food security and agriculture lead, explained, “If the prevailing conditions indicate that locusts will hatch and be taking off, the goal is to go early and destroy their nesting grounds.”

Even if the SERVIR team’s satellite efforts alone can’t end the outbreak, though, they aren’t the only technological weapon in humanity’s arsenal — there are also drones, a smartphone app, and even a supercomputer. 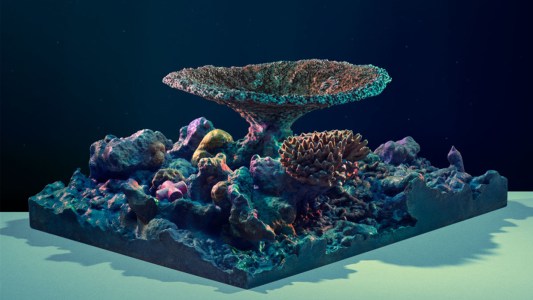 We don’t understand deep sea coral reefs. Photogrammetry is the first step to unlocking their significance.

Oceans
3d-modeling is changing how we see deep sea corals
Subscribe to Freethink for more great stories
Subscription Center
Sections
Video
Freethink
Subscribe
We focus on solutions: the smartest people, the biggest ideas, and the most ground breaking technology shaping our future.
Subscribe