Coal mines were the central force behind the Industrial Revolution. They provided a cheap source of power for new machines, like steam engines. But as they propelled the revolution forward, they also kickstarted a surge of greenhouse gas emissions — and we are seeing the consequences with climate change.

Coal is now on the way out in much of the developed world, replaced by cleaner energy. But what if old coal mines could actually be transformed into a carbon-free source of energy?

A wine-bottling company situated above a former coalfield is proving it can be done. They are tapping into the large heat source from the mine water in the labyrinth of tunnels below their warehouses.

“The exciting thing about this technology is that heating is one of the hardest things to decarbonise and here we are with these mines directly under where we need it.”

How it began: When Adam Black had to supply heat to one of Britain’s largest bottling firms, he wanted to do it right.

As the director of energy projects at Lanchester Wines, Black knew his warehouses were situated directly above four layers of shafts that extend down 200 meters, flooded with mine water — maybe the U.K.’s most underutilized energy source.

“The exciting thing about this technology is that heating is one of the hardest things to decarbonise and here we are with these mines directly under where we need it,” Black told Geographical.

How it works: With the right tools, mine water — warmed by geothermal energy deep underground — can be tapped to directly heat buildings on the surface.

Black called on a few geothermal experts from Iceland (where abundant volcanoes provide two-thirds of the island’s energy), and the team drilled a borehole into the mines below. The water they pumped to the surface had a nice 59 degrees Fahrenheit, reports BBC Future Planet.

59F may not sound like much, but combined with an electric heat pump, it’s able to keep the acres of wine bottles at the appropriate temperature.

An open-loop heat pump lifts 39 liters of mine water to the surface each second. The warm water enters a heat exchanger, where the heat is concentrated into liquid ammonia at 122 degrees Fahrenheit. This heat is then transferred to the factory’s heating system, which warms water circulating in radiator pipes throughout the facility. The mine water is returned to mines underground, where it warms up again to continue the cycle.

Geothermal heat from the mines is used to meet all of the warehouse’s requirements, including maintaining millions of bottles of wine at the proper temperature, as well as heating a nearby distribution center, reports Financial Times.

“The wonderful irony here is we used coal to carbonise the economy. Now we are going to use the coal mines that exist to decarbonise.”

That project began almost a decade ago. Since then, Lanchester Wines’ Gateshead site has become the most significant commercial mine water heating scheme in the U.K.

Why this matters: The majority of the U.K.’s largest cities outside of London are built on former coalfields. Nine million buildings, nearly a quarter of all homes in the U.K., rest above this untapped energy source. The U.K. coal industry, which boomed for more than a century, closed its last deep mine in 2015.

Lisa Pinney, the Coal Authority’s chief executive, told the Financial Times that mine water “could be a real contribution to zero carbon.”

“Abandoned mines are a large-scale opportunity to decarbonise heat,” she said.

The British Geological Survey is researching how to scale up the use of mine water heat from former industrial sites.

“The wonderful irony here is we used coal to carbonise the economy,” Mike Stephenson, the chief scientist at the British Geological Survey told Financial Times. “Now we are going to use the coal mines that exist to decarbonise.” 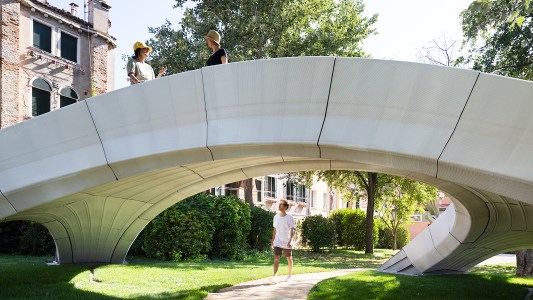 3D Printing
3D-printed bridge reduces use of “most destructive material on Earth”
Subscribe to Freethink for more great stories
Subscription Center
Sections
Video
Freethink
Subscribe
We focus on solutions: the smartest people, the biggest ideas, and the most ground breaking technology shaping our future.
Subscribe