The one-horned rhino population at Kaziranga National Park has grown by 200 since 2018 — fantastic news for a species once on the brink of extinction.

Why it matters: The greater one-horned rhino is one of the largest species on Earth, weighing in at 2.2 tons. Currently found only in India and Nepal, it is a “mega-herbivore,” with a diet consisting only of vast amounts of grasses.

The one-horned rhino’s grazing helps maintain grasslands and wetlands, which is important for the survival of other plants and animals — if this “keystone species” were to go extinct, it could negatively impact the entire ecosystem.

The challenge: In 1900, only 200 or so one-horned rhinos remained in the world, but conservation efforts have brought them back from the brink of extinction — in 2008, the International Union for Conservation of Nature elevated the species’ status from “endangered” to “vulnerable.”

The one-horned rhino isn’t entirely out of the danger zone, though.

If the one-horned rhino goes extinct, it could negatively impact the species’ entire ecosystem.

The animals are a hugely attractive target for poachers because their horns are believed to have medicinal properties and can fetch $132,000 per pound on the black market.

Monsoon season is another threat — during the 2016 season, 21 one-horned rhinos died due to flooding.

What’s new? The majority of the world’s one-horned rhino population lives in Kaziranga National Park in Assam, India. In March, nearly 400 people, including independent observers, set out to count just how many of the animals currently live in the 190-square-mile park.

With the help of drones and 50 domesticated elephants ridden like horses, the group determined that the local rhino population is currently at 2,613 — 200 more than when the last census was conducted in 2018.

Save the rhino: The government of Assam has been making a stronger effort in recent years to stop the poaching of one-horned rhinos — in 2016, it started assigning local police to help the team at Kaziranga National Park, and in 2021, it established the Anti-Poaching Task Force.

G.P. Singh, the police officer leading the force, told AP News the group carries weapons as sophisticated as those used by poachers, essentially allowing them to fight fire with fire — in the past, rangers and security guards carried outdated weapons.

To combat the danger of flooding, authorities have also built mud platforms in the park. During monsoon season, rhinos can take refuge on the platforms, while staff deliver food right to them.

The big picture: The global one-horned rhino population is still under 4,000, and the fact that more than half the animals live in one location increases their vulnerability — any disruption to the local environment could be disastrous for the species.

The astronomical value of rhino horns means the problem of poachers isn’t going to go away, either, so Assam will need to remain vigilant in protecting the species. But for now, everyone involved in the animals’ conservation should be feeling mighty proud.

“The latest figures are definitely an encouraging sign for conservation of rhinos in Kaziranga …The figures reflect the efforts put in Kaziranga not just in past few years but work done in the previous 30-40 years,” Rathin Barman, joint director of the Wildlife Trust of India, told the Hindustan Times. 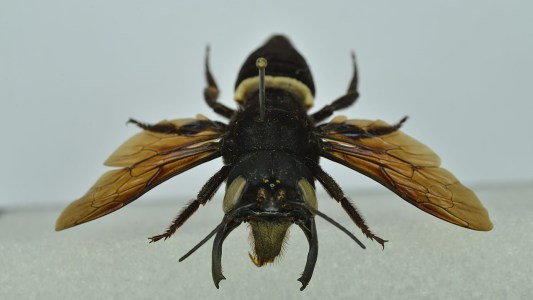 The giant bee was first discovered in 1859, but since has only officially sighted once. Now, researchers have found a specimen alive and well.