What if you could use trees to soak the metals out of contaminated soil?

This technique, called phytomining, could offer new ways to mine for metals that are more sustainable than the existing, environmentally destructive methods.

What is it: Phytomining is a method of harvesting metal from the soil by growing plants with a lot of biomass in which to accumulate the ore.

These are plants which can take up elements from the soil (at rates) orders of magnitude higher than normal plants.

These “hyperaccumulators” thrive on metals like gold, copper, and zinc. While all plants need trace elements to grow, the levels contained in hyperaccumulators would typically be toxic to plants.

“These are plants which can take up elements from the soil (at rates) orders of magnitude higher than normal plants,” Alan Baker, a botanist at the University of Melbourne, told RNZ.

The reason these plants evolved the ability to consume large quantities of metal remains a mystery, but it’s a skill humans could harness.

Mining trees: Scientists are trying to find out if farming these plants can be a method for cleaning up former mine sites — and also an eco-friendly alternative to destructive mining.

University of Queensland plant specialist Antony van der Ent looked globally for hyperaccumulating trees and found about 700 species (of the 300,000 known plant species on Earth), primarily concentrated near the equator.

Most of the plants he found feed on nickel, and three species had a 25% concentration of nickel in their sap. Van der Ent says nickel might be the source with the highest potential for phytomining.

Farming metal: Baker and an international team of colleagues launched a “metal farm” in Malaysia five years ago as a proof of concept. The goal was to demonstrate that these trees could be used to mine metals.

Every few months, a farmer would remove a foot of growth from the plants and burn or press the metal out. After a purification process, they had thousands of dollars worth of nickel citrate — about 500 pounds, reports the New York Times.

What happens next: Van der Ent says it is a promising start but not ready for commercialization yet. Since typically nickel mining has a large impact on the environment, phytomining it could be part of the solution, while also being used to clean up old, contaminated mining sites.

“Where you’ve had strip mining for nickel, which is a common practice in tropical regions, you could integrate the metal farming as part of the progress of rehabilitation,” Van der Ent told RNZ.

“Typically rehabilitation costs money, and this is a strategy where you could actually offset some of those costs as part of the rehabilitation program.” 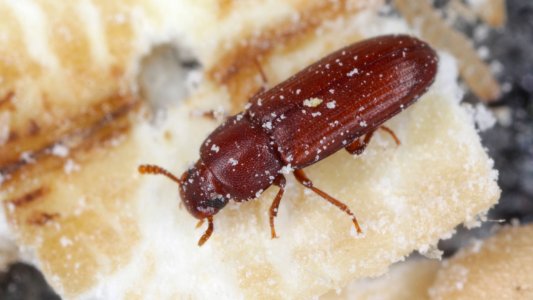 It may not be your number one idea, but having beetles pee themselves to death could be the next pesticide.

Agriculture
Is death by pee our next pesticide?
By B. David Zarley
Subscribe to Freethink for more great stories
Subscription Center
Sections
Video
Freethink
Subscribe
We focus on solutions: the smartest people, the biggest ideas, and the most ground breaking technology shaping our future.
Subscribe