For a long time, the strange pink snow was surrounded by mystery. Recently, a group of European researchers have hiked the Alps to look into the phenomenon, and they have now sequenced the DNA from the algae that is the hallmark of the rosey color.

What causes pink snow? The dye in the pink snow is actually a sign of life. The phenomenon comes from Chlamydomonas nivalis: a species of green algae that has a red pigment. It can be found on glaciers and snow capped mountains around the world.

Green algae are green. But when the environment heats up, the warmth causes them to produce a red carotenoid pigment as a sort of sunscreen, reports Vice. Because the stain darkens the color of snow, it also lowers its reflectivity and absorbs more heat, accelerating melting. More snowmelt provides more water for aquatic algae to grow in, and the cycle continues.

Because of this, the warmer climate may have initial benefits to the microalgae, but it could be devastating in the long term. Heat increases the occurrence of the pink snow, and the red color increases snowmelt. Ultimately, rapid snowmelt threatens the survival of the microalgae and the organisms that depend on them.

Code red: So, the team of French scientists set out on a mission to find out what the increase in pink snow means for the ecosystem.

The mission is called AlpAlga, a mashup of “Alps” and “microalgae.” They set out in 2016 and collected 158 pink snow samples from five locations in the French Alps. Analyzing the environmental DNA in the snow (DNA shed from organisms), the team was able to map the range of various microalgae. They found species that lived at different altitudes in the mountains and noted additional environmental conditions, like pH levels, which they documented in a study published in Frontiers in Plant Science.

Alison Murray, a research professor of biology at the Desert Research Institute, is working on a similar project, called the Living Snow Project. It employs citizen scientists to collect pink snow samples around the Sierra Nevada. Then Murray will compare DNA from the samples to answer some of the same questions the AlpAlga team aims to answer about biodiversity and its relationship with snowmelt.

“There is kind of an interesting link between what happens with algae when it’s in melting snowpack(…) The more algae that is in glacial ice or in snowpack, the faster the rates of melting that ice or snow. And so, if we have more algae, then we’ll have more rapid melting,” she said.

Moving forward: Both studies provide a baseline count of microalgae in the pink snow of their region, as well as some insights into their distribution and activity. In the AlpAlga study, the team described the algal blooms as “potential markers of climate change.”

Now they have a baseline count with which to compare future populations. In the future, their research might aid in predicting how these important species and the ecosystems they sustain will respond to rising global temperatures as a result of climate change.

Eric Maréchal, a study author, told Vice that this is a fascinating time for researchers because they can observe the transition from an old world into a new one.

“We don’t exactly know what it will be. But we know that life will survive, so there will be new communities, new arrangements, and new organizational structures.” 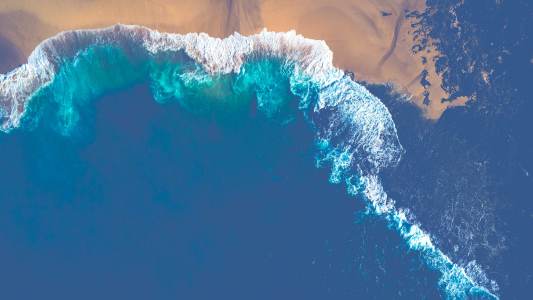 Researchers have developed a machine-learning platform that can rapidly process ocean color from satellite images — giving data on ocean health.