It may sound like science fiction, but the technology exists to reverse the direction of humans’ carbon cycle, turning emissions back into usable energy.

Why it matters: In the pre-pandemic days, people took about 38 million flights a year. Although 2020 saw a COVID-dip in travel, that number is expected to bounce back — which means, we need to find a way to make air travel better for the environment.

Airline travel produces around 2.5% of global carbon dioxide emissions (that’s more than the U.K. and Australia’s emissions combined!) — and that number is expected to triple by 2050.

Electric planes, of course, would help decrease the industry’s carbon emissions. The problem is, they’re not close to being widely adopted. A huge roadblock for electric planes is the batteries, which currently produce way less energy than fossil fuels, and also weigh the plane down even when they run out — unlike jet fuel, which burns away.

For the foreseeable future, electric planes will be for short flights and small aircraft.

Environmentally friendly fuel that can power the planes we already have could be a valuable option for rapidly decarbonizing the industry.

Although burning this new kind of fuel made from captured carbon would still emit CO2, it would allow airplanes to achieve net-zero emissions.

“We would use as much CO2 as we create in the combustion process,” said Jason Salfi, Dimensional Energy’s co-founder and chief executive.

The ingredients: The technology uses an electric current to split water and produce hydrogen (a process called electrolysis). According to Fast Company’s Adele Peters, the hydrogen is mixed with captured CO2 to make a pure synthetic gas. The gas is then transformed into liquid fuel — and voila, hydrocarbon energy, without any drilling, refining, or fossil fuels.

Right now, the captured CO2 comes from factories that produce the greenhouse gas as a byproduct, like the cement industry. But as direct air capture technology scales up, it would be possible to use CO2 captured directly from the atmosphere.)

According to Civil Beat, the startup only expects to produce half a barrel of fuel a day by early 2022. But they plan to get to 100 barrels a day by 2023, and that’s where the sunlight comes in: to scale, they plan to use a large field of mirrors (called a heliostat) to capture the sunlight at their test site in Arizona. The sunlight will then power the reactor, where the synthetic gas is made.

All about the money: In the next decade, Salfi told Fast Company that they’ll be price competitive with fossil fuels.

If achieved, that would be huge — there are other startups working on creating jet fuel from CO2, but so far none have been able to make the process cost-effective.

“The big problem is that at the moment, it’s about three times the cost of kerosene,” Chris Lyle, chief executive of the Air Transport Economics consultancy told the BBC.

This cost is a huge obstacle when trying to mass-produce synthetic fuel.

“Even if [airlines] are paying a premium today, sustainable aviation fuel only makes up something like less than a tenth of a percent of the overall market. . . . [T]hey just won’t respond unless it’s in their pricing model,” Salfi told Fast Company.

“Companies like ours just have to get the prices down.” 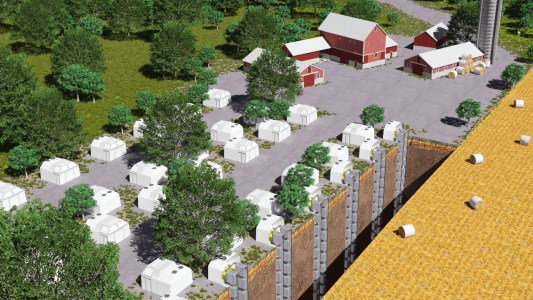 GreenForges is building an underground farm it thinks will deliver the benefits of vertical farming without two of its major shortcomings.