Vertical farming company Upward Farms plans to build what will be the world’s largest vertical farm in Pennsylvania — and fish are going to fertilize its crops.

The challenge: A vertical farm is an indoor facility where crops are grown on stacked shelves under artificial lights. This setup allows for more crops to be grown on the same plot of land — but that’s just one of the benefits.

Because farmers can precisely control everything from the temperature to the humidity on a vertical farm, they’re able to produce a more consistent product. They also don’t have to worry about water evaporation and runoff, which makes vertical farms more water efficient.

The downside to these farms is that they’re typically more expensive than their outdoor counterparts — sunlight is cheaper than artificial light, in most places, and the electricity needed to power a vertical farm’s A/C, water system, and other tech adds to the overhead cost.

The waste produced by the fish is filtered out of their tanks and used in place of synthetic fertilizers on Upward’s crops. According to the company, this approach results in double the crop yield of the average vertical farm, helping make its products more cost effective.

What’s new? On January 18, Upward announced plans to build a 250,000-square-foot vertical farm in Luzerne County, Pennsylvania. When it opens in 2023, it will be the largest vertical farm in the world (unless something bigger opens before then, of course).

Like Upward’s other farms, this one will produce both microgreens and fish, and its location in the Northeast will allow the company to get those products to people faster than is usually possible.

“With this new facility, we’ll be able to reach some of the most populous areas of the U.S. and nearly 100 million Americans within a single day of distribution versus the week it can take to receive products from the West Coast,” CEO Jason Green said in a press release.

The big picture: The vast majority of the world’s crops are still grown on traditional farms, but vertical farming could become a key part of feeding people in the future as climate change threatens traditional agriculture.

New technologies, such as AI and CRISPR, are helping farmers develop crops better suited for that hotter, drier future, but the ability of vertical farms to produce more crops on the same amount of land could prove beneficial as we work to feed a growing world population. 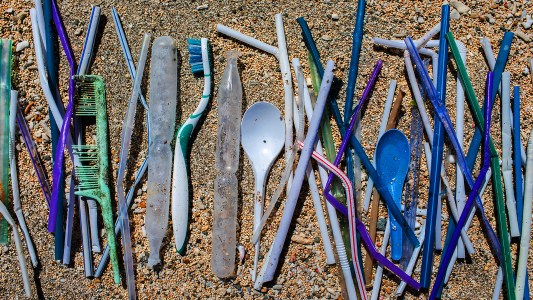 New biodegradable straws developed in China are as cheap as plastic, stronger than paper, and made from edible materials.

Sustainability
New biodegradable straws are made by bacteria
Subscribe to Freethink for more great stories
Subscription Center
Sections
Video
Freethink
Subscribe
We focus on solutions: the smartest people, the biggest ideas, and the most ground breaking technology shaping our future.
Subscribe