The vast majority of our sticky-sweet maple sugar comes from the northeast — New York, Vermont, and (especially) Quebec.

But with climate change expected to impact maple syrup production in its traditional home range, new players in the west are looking to tap into the market, bringing their own syrups — with their own spins — to the table.

“Most people have never tasted it or even heard of it. Even in the northwest, it’s a really new experience,” Eliza Nelson, founder of the Oregon Maple Project, told Modern Farmer of the West Coast offerings.

A sticky issue: The sappy heart of maple syrup production lies in the frigid climes of eastern Canada, where the Quebec Maple Syrup Producers (also known as the “maple syrup cartel”) account for over 70% of the world’s pancake-salving supply.

U.S. maple syrup production represents a smaller share, predominantly coming from Vermont and a gaggle of other northeastern states.

But the region has been feeling the effects of climate change, an impact that is expected to grow over the next few decades.

As the USDA explains, sap flow depends greatly on the weather.

“Among maple producers, it is well-known that spring temperatures must fall below freezing (usually at night) and rise above freezing (usually during the day), for sap to flow,” wrote Kristen Giesting, of the USDA Northern Forests Climate Hub.

Warmer springs will throw the maple trees out of whack, leading to weaker sap flow and therefore less syrup. Efforts like the USDA’s Acer Access and Development Program hope to bolster and expand the industry, and from Montanna to New Mexico, aspiring tree-tappers are answering the call.

Climate change is impacting the yield of the primary maple syrup producing regions of Quebec, New England, and New York.

A new flavor: As you might expect, efforts to move maple syrup production to new areas move… slowly.

The process for tapping the maple trees is the same, Modern Farmer reported, but northwest producers have a longer window for gathering the sap. There’s a catch, however: they need to move quickly when the freezing days they need arrive.

The season is longer, but the perfect conditions are more scatter-shot.

“This year, we have made eight gallons of syrup,” Nelson laughingly told Modern Farmer — the French Canadian cartel isn’t exactly threatened yet.

But the states working in the Acer program are already having some success, with maple syrup production in January and February, Axios reports.

“It’s an amber type syrup,” Rolston St. Hilaire, a New Mexico State University professor leading the charge, told Axios. “I almost cannot distinguish it from the sugar maple syrup that I buy from the store, so I am convinced that we can do it here.”

The northeast relies on the abundant and aptly-named sugar maple for maple syrup production, but the western upstarts are turning to different types of trees, including bigleaf maples in Oregon and the Norway maples tapped by Montana Maple Works.

This means maple syrup with unique flavor profiles depending on the tree and region it comes from.

“It’s got more robustness; it would be closer to a really dark amber maple syrup. It’s a really beautiful taste,” Nelson told Modern Farmer of her Oregon syrup.

While currently just a drop in the boutique bucket, western maple syrup production may play an increasingly important role as climate change continues to impact the freezing forests of the northeast, helping to fill in gaps when the taps fall short, St. Hilaire told Axios. 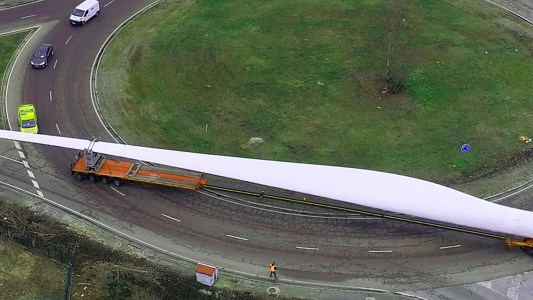 Wind turbine blades are notoriously difficult to recycle, but researchers and industry players hope a new material design may change that.