Israeli startup Future Meat Technologies has opened what it says is the first industrial-scale cultured meat production facility — a move designed to finally get lab-grown meat onto consumers’ plates.

“Our goal is to make cultured meat affordable for everyone,” CSO Yaakov Nahmias said in a press release, “while ensuring we produce delicious food that is both healthy and sustainable, helping to secure the future of coming generations.”

Why it matters: Demand for meat is higher than ever before, but the traditional means of producing it — by raising and slaughtering animals — is bad for the environment and arguably unethical.

Plant-based meat alternatives can’t perfectly match the taste and texture of real meat, so some carnivores aren’t willing to switch to them. Cultured meat is molecularly identical to the kind that comes from animals, though, making it an ideal sustainable, humane alternative.

From the get-go, our main focus was around scaling up.

The challenge: The cost of cultured meat has decreased dramatically since Dutch researchers revealed the first lab-grown burger in 2013.

However, it still costs more than animal meat — and until manufacturers can get the price down, most people will prefer the cheaper of the two options.

Cultured meat production: Future Meat’s new facility is capable of producing more than 1,000 pounds of lab-grown chicken, pork, or lamb per day, and beef production is expected to join the mix soon.

By scaling up its cultured meat production to this level, Future Meat hopes to cut costs and entice more people to try its sustainable meat.

“From the get-go, our main focus was around scaling up and reducing cost in order to have a commercially viable product,” CEO Rom Kshuk told Bloomberg.

The cold water: Future Meat says it can now produce four ounces of cultured chicken breast for $3.90 — a mind-boggling low price when you consider the first lab-grown hamburger cost $280,000.

Still, a farmed chicken breast costs 80% less than that per ounce, so it still has a large price advantage. It also has the advantage of actually being available in grocery stores — Future Meat is still working to secure regulatory approval for its cultured meat.

Waiting game: So far, only one startup (Eat Just) has secured approval to sell its cultured meat, and that approval is in just one nation (Singapore). However, we could be seeing a slew of cultured meat products hitting shelves soon.

Another Israeli company, Supermeat, is offering taste tests to diners in a restaurant attached to its cultured meat production facility while it waits to hear back from regulators. Upside Foods (formerly Memphis Meats), meanwhile, hopes to secure FDA approval before the end of 2021.

Aerospace
Former NHL enforcer builds an incredible electric airplane
An electric airplane developed by Beta Technologies, an ex-NHL player’s startup, is on the wish lists of Amazon, the US Army, UPS, and more.

Food
Smart sensor tells you exactly when fruit will ripen — or spoil
Inside vast warehouses, millions of fruits sit and slowly ripen. To help packers know when fruit has got to go, a biotech startup is turning to small sensors. 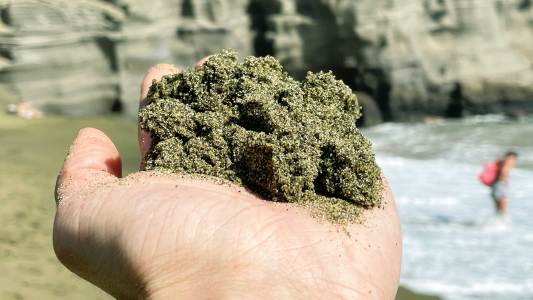 By spreading green sand all over a Caribbean beach, Project Vesta hopes to pull tons of carbon dioxide out of the atmosphere and lock it away for eons.