Melody Stein always knew that she wanted to own her own business. As the daughter of San Francisco restaurateurs, building a restaurant from the ground up seemed like a natural choice when she was in her late teenage years. So she applied for work at a local restaurant, aiming to get the kitchen experience she’d need to one day build her own operation.

But the management told Melody she was a liability. Because Melody is deaf, they reasoned, she might have accidental run-ins with staff while they were carrying dishes or hot pots and pans. They rejected her application.

“I realized that I needed to persevere and stay the course, I couldn’t give up.”

In 2011, Melody and her husband Russ opened a pizzeria, a restaurant where an all-deaf staff cooks and serves Neapolitan pizzas. The idea was to serve excellent food in an atmosphere that’s welcoming to both the Deaf community and hearing customers alike. Diners who don’t know sign language can simply point to what they want or jot down orders on a piece of paper, while those in the early stages of learning sign language can come and try out their skills over dinner.

For Melody, the restaurant is a way to “show the Deaf community that if we can do it, they can, too,” she told Freethink. The message seems to have resonated. Since 2011, the restaurant’s two locations in San Francisco and Washington, D.C. have hosted hundreds of Deaf customers from around the world, including Sweden, Italy, China, Japan, and Brazil.

But like any new restaurant, it took tireless work and many close calls before the pizzeria became successful.

Starting a restaurant is an uphill battle. Aspiring restaurateurs must not only establish a name for themselves amid the competition, but also obtain health permits and liquor licenses, manage steep overhead costs, pay vendors (often in cash), and build a reliable staff in an industry notorious for having one of the highest employee turnover rates. It’s no wonder why roughly two-thirds of independent restaurants fail within three years of opening.

But before trudging through the red tape of starting a new restaurant, Melody concentrated on the most foundational aspect of a new restaurant: cooking delicious food. With her sights set on opening a Neapolitan pizza joint, she decided to learn her craft by traveling to the source: Italy, where master pizza chefs (or pizzaiolos) have been making Neapolitan pizzas since a baker invented the style in Naples in the late 19th century.

The Neapolitan pizza is a unique pie. To be considered authentic by the Associazione Verace Pizza Napoletana, a Neapolitan pizza must feature a specific type of flour, mozzarella cheese, and tomatoes (either San Marzano or Pomodorino Vesuviano), all of which must be cooked in a wood-fired oven at roughly 905 degrees Fahrenheit for no more than 90 seconds. In short, there are many ways to make a pizza, but only one way to make a Neopolitan.

Melody embraced the challenge. She asked her mom to accompany her to Italy so she could help interpret. Her mom was unsure at first, considering she’s not a professional interpreter. But it all worked out, partly because “Italians gesture a lot anyway,” Melody told Freethink.

Serving up Italian delicacies to the San Francisco Deaf community

Confident in her pizza-making skills, Melody and Russ began setting the groundwork for the restaurant. They were aware of the risks and obstacles they would face as new restaurateurs. The lenders were, too. When Melody told her local bank that she was seeking a small-business loan for a new restaurant, the banker wouldn’t even consider her business plan.

The next options were either securing a loan elsewhere or selling equity of the business to friends.

“I explained my vision of following Neapolitan tradition with some added Asian influence,” Melody told Freethink.

A group of friends ultimately decided to loan Melody and Russ the money they needed to start the pizzeria, provided they pay it back after five years. Shortly after opening, the restaurant enjoyed some media attention and flocks of curious customers.

“Our first year was like a honeymoon period with how many customers we attracted,” Melody told Freethink. “We weren’t taking a cut at that time. We just paid our staff, the food costs, utilities, and rent.”

After its first year, the restaurant netted $8,000 in profit — a modest sum, sure, but one that marked empirical success in a brutal industry.

“I realized we were making it,” Melody said. “It’s not because we are Deaf. We have skills and knowledge. We can run a restaurant.”

The second year proved more challenging. As it became clear that the business couldn’t sustain itself on dine-in sales alone, Melody and Russ decided to experiment with catering. But compared to other restaurants, catering was a more complicated process for the pizzeria. After all, the pizzas are cooked in a wood-fired oven and served hot immediately after, meaning that delivery really wasn’t an option.

To solve the problem, Melody and Russ loaded up their oven on a trailer and drove it to their first catering gig: a wedding with 100 guests. It was a success. But Melody and Russ realized they’d need a dedicated oven and truck in order to scale up their catering operation. After finding a food truck for sale in Florida, one that resembled a San Francisco cable car, they decided to buy it and drive it across the country back to California.

It turned into a memorable road trip.

“On the way home, we could make stops and sell pizza to the Deaf community in different states,” Melody told Freethink. “We wanted to encourage young students to follow their dreams. You can be anything you want.”

A model for young people in the Deaf community

The pizzeria was generating more revenue than ever. But after seven years of owning and operating the business, Russ began suffering health issues and the couple decided to sell the restaurant to a nonprofit organization.

“The restaurant needed to succeed,” Melody said. “I didn’t want to see it shut down because of health issues.”

In 2020, dwindling revenues caused by the pandemic forced the San Francisco location to shutter. The nonprofit switched to a food-truck-only model. Although the truck remains popular today, the closure of the brick-and-mortar location represents a significant loss for some in the local Deaf community, as Anna Mindess wrote for San Francisco’s KQED:

“After a week of feeling isolated as the only Deaf person in a hearing workplace, the pizzeria was just the place to unwind and probably bump into Deaf friends or friends of friends and relax, chatting the night away.”

Looking back on the restaurant, Melody says she misses serving creative food. But she hopes her entrepreneurial success can inspire people in the Deaf community to pursue their dreams and not be dissuaded by obstacles, including the inordinately high rates of employment and workplace discrimination that hearing-impaired people face.

“I remember when the banks turned us down, I thought it wouldn’t happen,” Melody said. “Now I can say that I actually did it!”

Business
No, 90% of new businesses don’t fail. Here’s why.
To say that something failed, simply because it stopped or changed, is to dangerously limit our view of the world.
By Jason Feifer
Up Next 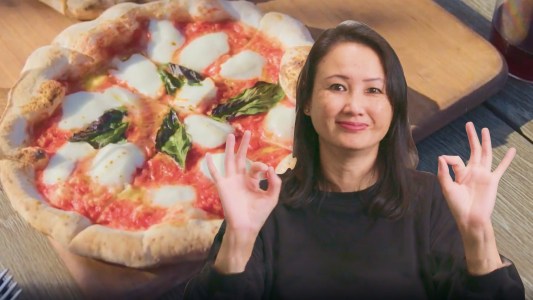 This deaf chef was a “liability.” So she started her own groundbreaking restaurant.