Uber’s self-driving beer truck delivered 50,000 cold ones this week. While a human driver was on board (as is the case with all of today’s self-driving vehicles), the rig did just fine without its master. Wired reports that the truck’s tech “works only on the highway, where it doesn’t have to deal with tricky variables like jaywalking pedestrians, four-way stops, or kids on bicycles. It maintains a safe following distance, and changes lanes only when absolutely necessary.”

23andMe has halted its work on a new generation of home genetic tests. “This is a whole new area,” the company’s co-founder tells BuzzFeed. “One of the things people are still figuring out with next-generation sequencing is ‘Exactly what does all that information mean?’” Meanwhile, another gene testing startup is facing tough questions.

No Ubering in the self-driving Tesla! Tesla announced this week that two forthcoming models will come with self-driving software and hardware. Ars Technica reports that “buried in the notes about this new functionality was a warning to future Tesla owners: don’t expect to be able to use your EV driving for Uber, Lyft, or any other ride-sharing service that isn’t owned by Tesla.”

U.S. manufacturing outputs are at an all-time high. Factory jobs aren’t. Automation explains the difference, and why bringing back factory jobs is probably not going to happen.

A chatbot that mimics dead people? One programmer built one after her best friend died. It generates new conversations based off their old text exchanges, and it actually helped her grieve.

How to set the world record for catching a grape with your mouth: First, get a hot-air balloon.

AI
Microsoft’s new AI needs just 3 seconds of audio to clone a voice
Microsoft has unveiled VALL-E, a voice-cloning AI that only needs a 3-second sample to simulate a speaker’s voice with remarkable accuracy. 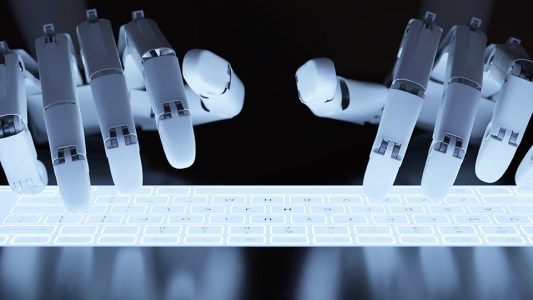 What does it mean for the future of journalism when a computer can turn mounds of data into a cohesive narrative?

AI
This computer can write 2,000 snarky articles per second
Subscribe to Freethink for more great stories
Subscription Center
Sections
Video
Freethink
Subscribe
We focus on solutions: the smartest people, the biggest ideas, and the most ground breaking technology shaping our future.
Subscribe