A common prairie grass can sponge up military-grade pollutants from the soil. All it needs is a bit of genetic modification.

Researchers found that they can genetically engineer grass to combat soil degradation and effectively eliminate poisonous contaminants left in the field by military explosives.

The problem: The compound RDX was widely used in military explosives like TNT during World War II. RDX is so explosive that it tops dynamite, pound for pound. For that reason, it is still used in ammunition and remnants can be found at firing ranges, munition dumps, and minefields.

Unfortunately, besides its impressive explosive power, it has a dark side — RDX is incredibly damaging to the environment. It is very stable, lasts a long time, and is odorless and flavorless. RDX has leached into the soil at many of these military sites, resulting in widespread groundwater contamination.

The EPA designated RDX as a priority compound because it poses a severe threat to wildlife and humans.

“The removal of the toxic RDX from training ranges is logistically challenging and there is currently a lack of cost-effective and sustainable solutions,” Liz Rylott, co-author of the study, said in a statement.

The solution: Rylott and her team at the University of York have found (or grown) a solution.

In a study published in the journal Nature Biotechnology, they demonstrated that genetically modified prairie grass could remove the RDX compounds from the soil.

According to the researchers, their study is one of the most successful attempts to use plants to soak up organic pollutants.

The method: The team began by grafting two bacterial genes into the grass. The genes were known to break down RDX. If they can do it in bacteria, why not try them out in grasses?

They grew the GM grasses on contaminated soil at U.S. military sites. They found that the plants soaked up and degraded the toxic compounds — so much that the toxins were barely detectable in the plant’s tissues anymore. The grass was able to degrade about 27 kg of pollutants per hectare.

“Our research demonstrates how the expression, in switchgrass, of two bacterial genes that have evolved specifically to degrade RDX gives the plants the ability to remove and metabolize RDX in the field at concentrations relevant to live-fire military ranges,” Rylott said.

If approved by regulators, the grass could be used more widely for cleaning up toxic sites around the country.

Medicine
mRNA breakthrough offers a potential heart attack cure
King’s College London researchers have used mRNA to regenerate cardiac tissue in pig hearts, what they hope is the first step towards a heart attack cure.
Up Next 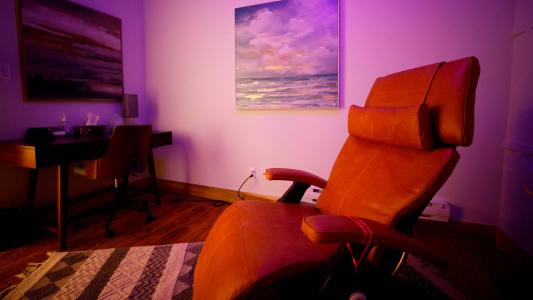 Ketamine infusion therapy takes the anesthetic from dance floors to depression clinics. But how does the drug work, and what is it like?

Drugs
Ketamine infusion: What it's like and how it works
Subscribe to Freethink for more great stories
Subscription Center
Challenges
Video
Freethink
Subscribe
We focus on solutions: the smartest people, the biggest ideas, and the most ground breaking technology shaping our future.
Subscribe