A group in the Czech Republic is building a 3D printed house, which, on its own, isn’t anything we haven’t seen before.

What sets this house apart from the others, though, is its final destination: Prague’s Vltava river.

“I dare say it’s the first-ever floating 3D printed building in the world,” Michal Trpak, the sculptor behind the project, told AFP.

Trpak is the co-founder of Scoolpt, an architecture studio specializing in 3D printing with concrete, so he’s no stranger to working with the medium.

For this particular project, he designed a 3D printed house inspired by the shape of a protozoa (single-celled organisms that look similar to bacteria). He even gave it a name alluding to the microbe: the Protozoon, a combination of “protozoa” and “pontoon,” for the type of boat it’ll float on.

The house has a footprint of 463 square feet and comprises three rooms: a bathroom, a bedroom, and a combination living room/kitchen. Once finished, it’ll have a green roof, recirculation shower, and other eco-friendly features.

Using a Scoolpt robotic arm extruding specially formulated concrete, Trpak and a team of about 25 workers began printing the house on June 11.

The arm prints at a speed of six inches per second, so it’ll take just 48 hours of printing total to create the concrete structure.

Once the concrete is fully hardened, the team will affix their 3D printed house to a pontoon and place it in the river. Trpak and his partners in the project, building society Burinka, plan to then unveil the Protozoon during a ceremony at Střelecký Island on August 18.

The Protozoon will be the first 3D printed house of any kind to be built in the Czech Republic,  but 3D printing is gaining favor as a construction medium in other parts of the world for several reasons.

For one, it decreases the need for human labor — Burinka CEO Libor Vosicky said in a press release that building a conventional brick building would’ve required 65 workers compared to the Protozoon’s 25 — which could help address construction worker shortages.

As evidenced by the Protozoon’s 48-hour construction time, a 3D printed house can also be built quickly — in 2017, a Russian company even managed to print a comparably-sized home in just 24 hours.

3D printing can also cut construction costs and open up design possibilities beyond the standard 90-degree angles of many homes.

“3D houses will adapt to the people or the countryside,” Trpak said. “The robot doesn’t care about the shape of the curve.”

As for the Protozoon team’s decision to affix their cell-inspired 3D printed house to a pontoon and float it in a river, that was more a logistical choice than an aesthetic one.

“We didn’t have a plot of land to place it on, and anyway, to do that, you need a building permit and that takes up to two years (to secure),” Trpak said. “But if you float it on a river, you only need consent from the navigation body, which is much faster.” 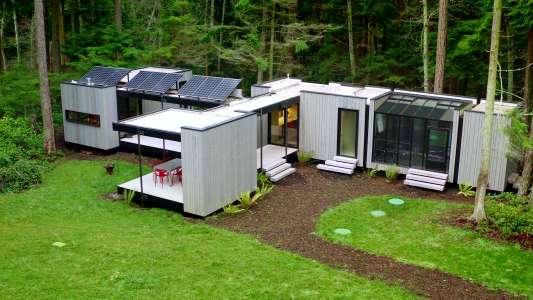 Series | Challengers
This carbon-negative dream house ships in a box5:11
Subscribe to Freethink for more great stories
Subscription Center
Sections
Video
Freethink
Subscribe
We focus on solutions: the smartest people, the biggest ideas, and the most ground breaking technology shaping our future.
Subscribe