We may one day be able to press a button to control our sleep. A wireless device, implanted in the arm, could be a rapid, simple way to control our body’s circadian clock — and that could radically alter how we treat sleeplessness.

Living pharmacy: The device, designed to be an implantable chip, is called a “living pharmacy” because it would make everything within the body, on demand — no trip to the CVS required. Using specially engineered cells, which can be triggered by an LED light, the chip would make and release a stream of molecules that control your circadian rhythm.

This living pharmacy doesn’t actually exist yet, it’s still in early development. However,Northwestern University and DARPA have recently partnered together on a 4.5 year project to bring the blueprint to life.

The device, designed to be an implantable chip, is called a “living pharmacy” because it would make everything within the body, on demand.

The project is designed to help military personnel quickly adjust to new time zones. Prolonged sleep deprivation can lead to cognitive impairments that could result in accidents, injuries, and even death — all things the military wants to avoid in combat zones.

Why this matters: Of course, sleeping pills already exist. But it’s not always convenient to carry pills (especially in combat zones) and many medications, like Ambien, can have unwanted side effects such as grogginess, anxiety, and memory loss.

While the military will get first dibs on the living pharmacy, if it works for soldiers then anyone who suffers from sleep deprivation — such as medical personnel and first responders — could benefit.

How it would work: The microchip would contain engineered cells. The cells, taken from a human donor, could be modified to release tiny proteins, called peptides, when stimulated by a LED light embedded in the chip.

These peptides occur naturally in the body and help regulate a person’s circadian rhythm. This device, however, allows the person to control the timing and dosage of the peptides by turning the LED on and off through an app on a smartphone. The app and microchip would communicate via a battery-powered hub attached to an armband, according to the Smithsonian Magazine.

Reprogramming jet lag: If a soldier was traveling from DC to Afghanistan, 8.5 hours ahead, they would input their arrival time into the app days or weeks prior to the trip. Theoretically, the app could then activate the LED in the microchip, releasing peptides into the bloodstream. The amount of peptides released would be determined by the person’s biometrics, such as their internal body temperature, monitored through sensors in the device.

“Anything that your cells can produce, you can theoretically engineer cells to produce on demand.”

The peptides would then be sent to the part of the brain, the suprachiasmatic nucleus, that regulates the circadian rhythm. This could allow the soldier’s body to begin adapting to the time zone change before they even step on the plane.

“This control system allows us to deliver a peptide of interest on demand, directly into the bloodstream,” said Jonathan Rivnay, principal investigator on the project at Northwestern.

“Anything that your cells can produce, you can theoretically engineer cells to produce on demand,” he told Neo.Life.

“The kill pill”: There are numerous engineering challenges that lie ahead, but the real thorny questions hit on the safety and privacy of the device.

According to the Smithsonian, “should anything go wrong” the person wearing the device would “swallow a pill that would kill the cells inside the chip only, leaving the rest of their body unaffected.”

According to the Smithsonian, the messages traveling to and from the hub will be encrypted, the user will have to somehow verify any command they give the hub, and the data will only be stored on the device itself and not in any kind of cloud. Most importantly, the implantable device couldn’t be used without the armband: remove it and the implant would become useless.

Beyond sleep:  If it proves to be effective, this method could change how we treat a whole host of medical issues. For certain illnesses that require a person to take medicine at a certain time each day, an implantable device could free them of this scheduling burden, which could mean fewer missed doses. It could also mean that more medication could be optimized for timing, which is thought to play a role in a patient’s health outcome.

“The classic example is for cancer,”  Paul Sheehan, who’s managing the project at DARPA, told Neo.Life. “It is known that the best time to give many cancer treatments is when patients are asleep.”

“But that doesn’t fit in with when the doctors and the nurses are available.”

If we can hack the body to deliver on-demand therapies, the possible health benefits are endless. 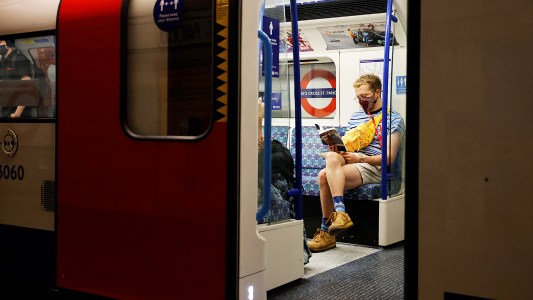 Coronavirus
UK researchers are growing the Delta variant for human challenge trials
By B. David Zarley
Subscribe to Freethink for more great stories
Subscription Center
Sections
Video
Freethink
Subscribe
We focus on solutions: the smartest people, the biggest ideas, and the most ground breaking technology shaping our future.
Subscribe