When we see augmented reality (AR) in sci-fi, it usually takes the form of glasses — or even contact lenses — that are capable of producing rich, immersive experiences.

Real-world AR has certainly come a long way since Google Glass, but there’s still a pretty serious tradeoff between form and function: the more the wearable resembles a normal pair of glasses, the less augmentation it can actually pull off.

There are many reasons for that — after all, we’re talking about putting a context-aware computer on your head — but one issue lies with the optical system, or how the headset puts the AR imagery in front of your eyeballs.

The metaform allows for richer and more accurate visuals in augmented reality — while simultaneously decreasing the size of the lenses.

Researchers at the University of Rochester Institute of Optics have devised a technology that could bring us one step closer to the dream of AR wearables that look more like Ray-Bans than hard hats.

“No one wants to walk around with a bucket on their head the whole day,” said Stanford University professor Mark Brongersma, who leads the university’s Plasmonics and Photonics group.

The challenge: The ideal AR optical system is a window that is thin and untinted in front of your eyes so that you barely notice it — and the digital content merges seamlessly with the physical world around you. Straightforward as that might sound, getting light to cooperate is no simple matter, and all current AR devices suffer from it in one way or another.

Thus, designing optics that will produce rich digital images in projected light, while simultaneously letting in external light in such a way that all of it looks real — and not making people look like cyborgs in the process — is still among contemporary AR’s peskiest snags.

Enter: The metaform. It’s a new technology that University of Rochester researchers claim can “defy the conventional laws of reflection, gathering the visible light rays entering an AR/VR eyepiece from all directions, and redirecting them directly into the human eye.”

The technology is outlined in a new paper in the journal Science Advances. The team describes a method of imprinting a tiny “forest” of nanoscale structures onto a form of optics called freeform optics.

But don’t worry about being a freeform optics expert; the point is that the metaform allows for richer and more accurate visuals in augmented reality — while simultaneously decreasing the size of the lenses.

AR
Magic Leap reveals release date, price for new AR glasses
Two years after laying off half of its staff, Magic Leap is back with a new pair of AR glasses, the enterprise-focused Magic Leap 2.
By Kristin Houser 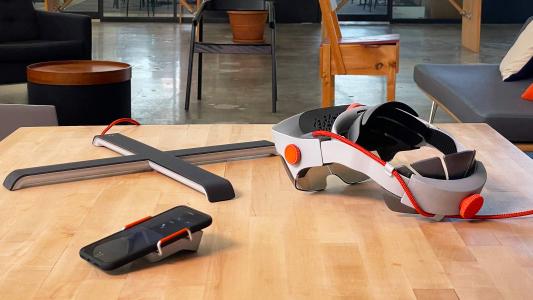 Campfire emerges from stealth with an integrated system for real-time, remote 3D collaboration.

AR
Holographic collaboration may be the future of work
By Jesse Damiani
Subscribe to Freethink for more great stories
Subscription Center
Sections
Video
Freethink
Subscribe
We focus on solutions: the smartest people, the biggest ideas, and the most ground breaking technology shaping our future.
Subscribe