When you imagine life and work in the future, one of the first things that probably comes to mind is holograms. From Star Trek to Minority Report, holograms pervade our science fiction. They seem really cool and useful — imagine dialing in a hologram of your friend who you haven’t seen in a while — but for the most part, technology hasn’t lived up to our scifi dreams.

However, one company, Campfire, has recently emerged from stealth to show us a version of the future where holograms are integrated into our normal work days.

State of the Hologram: While the word hologram is used liberally, for many purists holograms must be 3D and viewable in the real world. Sorry Tupac fans, his hologram at Coachella 2012 wasn’t actually a hologram in the classical sense, instead relying on CGI and the principles of an illusion technique called Pepper’s Ghost.

But there’s relative drawbacks with each of these when it comes to using holograms to collaborate. Headsets are expensive and aren’t functional enough yet to merit ditching your laptop. Smartphones and tablets are easier to manage but are limited in the visual experience they offer, and often require you to hold the device in your hands. Holographic displays are the newest entrant, and, like headsets, are still establishing the use cases that will push people to integrate them into their current setups. While they are great for individual developers, collaboration is limited to whoever is physically around the device(s).

Now: Campfire has announced a product system (comprised of hardware and software) that allows for real-time holographic collaboration between colleagues — whether in-person or remote.

Last week in Los Angeles, I got an early preview of the system in action.

What it is: Campfire isn’t the Holodeck, but it’s not trying to be. Where many startups fail trying to be too many things for too many people, Campfire hopes to succeed by solving a specific problem for a target demographic: it lets designers and engineers collaborate on holographic 3D models in real-time, regardless of where they are in the world.

Users can see holograms in augmented reality through a proprietary headset system that can easily be integrated with existing computing devices, like PCs and tablets. This means that, for example, architects all over the world can collaborate on a holographic 3D model of a rendering of a building they are designing. They will be able to scale and rotate the building, look at cross-sections, and leave annotations on particular features that still need work. As in a Google Doc, all of these changes are represented instantly for all involved.

Why it matters: Virtual and hybrid options in the workplace are here to stay, but for professionals whose work is three-dimensional, video options alone don’t quite cut it. With remote work poised to play a bigger role in the future of work, Campfire could allow these professionals to get work done at higher degrees of productivity, in some situations even faster than they would in-person.

Hands on: Campfire’s system does what it sets out to do. In my demo, which involved four people, one of whom was collaborating remotely, it was simple to set up, didn’t have noticeable lag as we adjusted 3D models, and provided a consistently incredible visual experience, with the best field of view (FOV) in an AR device of its kind.

The system involves three pieces of hardware: 1) the Headset, 2) the Console, a tabletop tracker that keeps objects oriented for all involved, 3) the Pack, a device that attaches to the back of your smartphone, thereby turning it into a controller.

Visuals: One of the biggest problems with current-generation AR headsets is their limited FOV, or rather, the available space for augmented content to appear.

Generally speaking, bad FOV kills immersion; it’s kind of hard to feel fully absorbed in an AR experience when the content you’re viewing cuts off in a neat rectangular box.

Microsoft’s HoloLens 2, for example, provides 52° diagonal FOV, while the Magic Leap 1 offers 50°. By comparison Campfire’s headset has 92° diagonal FOV — and, forgive the pun, you can really see the difference.

While specs weren’t provided on the headset’s resolution, in my experience the resolution was competitive with the HoloLens 2; I didn’t have any problems reading text and seeing details in virtual objects. The colors were rich and stood out clearly. Speaking of which…

Going VR: Campfire is designed primarily for augmented reality viewing, but there are some cases when the outside environment needs to be blocked out and put users in virtual reality.

This is particularly true when working with 3D objects that have a lot of blacks and dark colors. This is because AR overlays virtual content on the real world by projecting light onto lenses, and it’s hard to project darkness accurately using light. For these cases, Campfire has developed two different visors that snap to the headset magnetically, allowing users to switch back-and-forth between AR and VR. This isn’t the type of VR you’d want to use to play games or spend long stretches of time using it; where headsets like Oculus Quest 2 fully immerse you by blocking out the entire surrounding environment, Campfire’s VR leaves the real-world environment visible in your periphery.

Controllers: To interact with virtual objects, Campfire Packs — the device that turns your smartphone into a controller — snap onto the back of users’ smartphones, automatically triggering a controller app. This app has the features referenced in the architecture example above — including a laser pointer, scaling/rotation, and a “slice” function that allows users to view a cross-section of 3D objects at any desired angle. Annotations can be left on specific parts of these objects through typing on the phone.

Friction: Getting into the headset wasn’t a problem, though I did notice that you need to get the device positioned in exactly the right place to take advantage of the visual fidelity. Even a slight bit off made a huge difference in how content appeared in the displays. Otherwise, setup was quick. Headsets plug into PCs through one USB-C cable, the two arms of the Console snap together in one step, and Packs trigger the Campfire smartphone app automatically. Latency was never an issue during the half hour I spent in-headset.

This device isn’t for everyone; in fact most people won’t have any cause to use the Campfire system. But for those who need to collaborate on 3D objects, this will feel like the jump from emailing Word documents back-and-forth to collaborating on a Google Doc in real time.

Logistics: Campfire is currently only available through its pre-release Campfire Pioneer Program. The company is using a subscription model, and said it plans to ship commercially in Fall 2021. Pricing has not been announced.

AR
Magic Leap reveals release date, price for new AR glasses
Two years after laying off half of its staff, Magic Leap is back with a new pair of AR glasses, the enterprise-focused Magic Leap 2.
By Kristin Houser 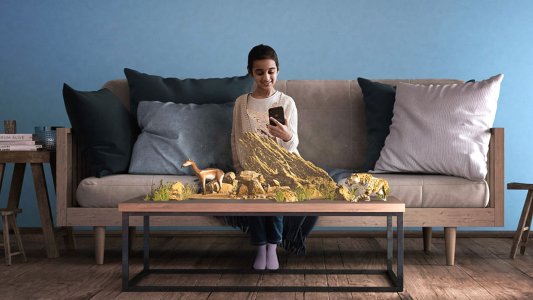