Augmented reality (AR) may soon fit inside your contact lenses. Mojo Vision, a start-up out of California, revealed a prototype lens earlier this year that demonstrated the feasibility of placing a heads-up display right on our eyes — without obstructing our view of the real world.

AR is an emerging technology that many in Silicon Valley think will become as commonplace as smartphones. So far, most experiments with AR have centered around glasses or headsets: there was Google Glass in 2014, Apple Glass is expected to appear soon, and a variety of other wearables are already on the market.

However, these glasses tend to be more Geordi La Forge than à la mode. So Mojo Vision decided just to skip the clunky wearables and go straight to miniaturizing the technology — projecting the information right into our retinas.

This discrete technology would make it more appealing to consumers. It would also have real-world applications, for example, in jobs or environments that aren’t great for wearables, the contact lenses would overlay important information without getting in the way.

Not Just For Sci-fi

While the lenses are still in development — and have a lot of technical and regulatory hoops to jump through before you’ll be able to pop one in — the company has ambitious goals for its future use.

The first is aiding those with poor vision. The prototype can reportedly enhance images by providing real-time contrast and lighting adjustments, which may help with things like border detection and night vision. There’s also a zoom, which could be useful for discerning things like facial expressions.

Beyond that, the technology would be a godsend to first responders. Fast Company describes its potential usefulness for firefighting. A future firefighter would be able to see the outline of objects in a smoke-filled room, track the whereabouts of other firefighters (even when physically separated), and see their oxygen tank level without having to pull out a device.

All of this data and more would conceivably be displayed right in a firefighter’s line of sight — providing lifesaving intel that doesn’t distract from the job at hand.

Next up, the company plans to build a version for the rest of us, which would display information such as weather, location, names of people you’re speaking with, text translations, etc.

Mojo Vision has built a working model of the contact lens. (Although the demo version available to the public has to be viewed through a virtual-reality headset…otherwise, gross).

Mojo Vision decided to skip the clunky wearables and go straight to projecting AR right into our retinas.

The micro-display is the core of the technology. It’s positioned directly in front of the pupil, just like regular contacts. (Mojo lenses, however, are gas-permeable and rigid, so they’ll also need to be custom-fitted to your eyes.)

The display is micro but mighty, containing 14K pixels-per-inch — that’s 300 times as many pixels-per-inch as your smartphone! It focuses light directly on a tiny portion of your retina in the back of the eye, which contains the majority of your nerve endings. Focusing the display on this region means the lenses require less power and less light to transmit images.

Mojo is working on embedding other crucial electronics into the lenses.

Right now, the prototype gets most of its power and computing capabilities by communicating with a device worn on the wrist. That’s expected to change with the next iteration.

Power will likely come from small, film-like batteries within the lenses, which Mojo claims should be good for a full day of use (of course, that’s what they all say).

As with most AR glasses, the display info would be wirelessly transmitted from the wearer’s smartphone. How, exactly? That crucial detail is still unclear — according to the Financial Times, the company has said it will not rely on Bluetooth but instead on a proprietary communication technology it calls “mojotooth.” You won’t find that in your iPhone settings, so whether and how it would be able to talk to our current smartphones isn’t clear.

Crucially, the lenses will also need an image sensor embedded (the prototype was connected to an external one). This will enable them to recognize what you’re looking at and bring up contextual information that may be helpful.

Eye-tracking sensors will also be included in the final version, helping the lenses follow your gaze.

As with most new technology, the potential invasion of privacy is a huge bucket of cold water. The lenses won’t have a video camera and won’t be able to record, but the image sensor will allow them to recognize what we see.

The company also plans for the lenses to recognize faces so that it can help us remember things like names and details that will aid the conversation. If all of this comes to fruition, we’ll have to trust that Mojo won’t — or can’t — share this data with third parties, like advertisers and governments.

Mojo is currently working toward the next iteration, which is expected to be revealed later this year.

The next big hurdle for the company perhaps isn’t the technology itself but gaining FDA approval. The agency admitted Mojo into the Breakthrough Devices Program, which gives guidance to getting the lenses approved for medical purposes. That process will likely take at least a few years for the lenses to be tested in clinical trials.

Then, the company will turn its attention to developing its other applications. No launch date has been announced, but according to Steve Sinclair, the company’s VP of product and marketing, “It’s not something that’s 10 or 20 years away.”

So keep an eye out for it. 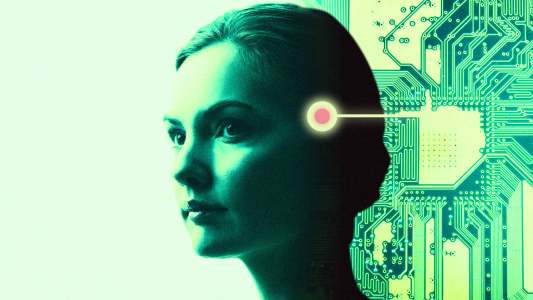 Brain-computer interfaces could enable humans to “merge with AI.”

Biohacking
How to radically biohack your mind
Subscribe to Freethink for more great stories
Subscription Center
Sections
Video
Freethink
Subscribe
We focus on solutions: the smartest people, the biggest ideas, and the most ground breaking technology shaping our future.
Subscribe