Agricultural drones, self-driving tractors and seed-planting robots are among the innovations that could be key to future food supplies, as autonomous farming promises to produce more crops with less effort and less impact on the environment.

Labour shortages in Canada’s farming industry could grow to 114,000 by 2025, according to the Agriculture and Agri-Food Labour Task Force. It is a similar story in the US, where changes in immigration numbers are causing a farming labour shortage.

Market forecasts expect the autonomous farming sector to surpass $95 billion by 2027, according to research from Global Market Insights Inc.

How autonomous farming will change agriculture

Here are three ways autonomous farming is set to take the agricultural industry by storm.

Autonomous trackers are set to revolutionize the agricultural industry by removing the human element and easing labour supply at a time when recruitment in the sector is dwindling.

“Until recently, agriculture has always been about doing more, with more – more horsepower, more inputs, more acres – but the new digital era is changing all of that. In the last decade, it has been about doing more with less, and providing farmers with tools to make informed decisions,” says Jahmy Hindman, CTO at John Deere, speaking at CES.

Driverless tractors aim to release the farmers from 8-12-hour days of just driving. They allow farmers to take control via an app on their phone or computer. The farmer can use the app to position a tractor, drive the length of a field, turn around, come back and manoeuvre around obstacles.

The World Economic Forum’s New Vision for Agriculture (NVA) initiative is helping to ensure that the agricultural sector can sustainably nourish a growing world population. The NVA engages with over 650 organizations and has advanced 100 value-chain initiatives to benefit millions of farmers.

Seed sowing requires a substantial amount of human effort and is time-consuming, but seed-sowing robots are saving farmers time and money.

The autonomous devices plant seeds in the desired position, taking away the human element usually required. 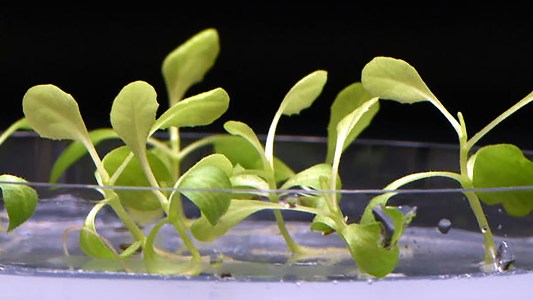 A new artificial photosynthesis technique could boost crop yields on existing farms or allow us to grow plants in new locations — like space.