Future farms might grow crops in total darkness, thanks to “artificial photosynthesis” that eliminates plants’ need for sunlight.

Not only could this allow us to grow more food on Earth, it also opens the door to growing plants in previously infertile locations — such as space.

Plants use photosynthesis to convert the energy in sunlight into the chemical fuel they need to grow. While this process is effective, it’s not terribly efficient — less than 6% of the energy absorbed from sunlight ends up in the plant matter. For some crops, it’s less than 1%.

“Using artificial photosynthesis to produce food could be a paradigm shift for how we feed people.”

That inefficiency means we need to farm in locations that get plenty of direct sunlight. Add in plants’ needs for good soil, ample freshwater, and moderate temperatures, and the places we can grow crops is limited even further.

That drives the search for new land into forests and other wildland, which exacerbates climate change.

The effects of climate change, in turn, are rendering some land that was once ideal for farming unusable — yet Earth’s population continues to grow, meaning we need to be producing more food with less land.

More than a century ago, Italian chemist Giacomo Ciamicianong predicted that we might one day be able to use technology to convert the sun’s energy into chemical fuel the same way plants do, giving birth to the concept of artificial photosynthesis.

While some researchers hope to use that fuel to power jets, others want to use artificial photosynthesis to supercharge plant growth. That could allow us to produce more food on the same amount of land, or even farm in places plants don’t naturally thrive.

“Using artificial photosynthesis approaches to produce food could be a paradigm shift for how we feed people,” said Robert Jinkerson, an assistant professor of chemical and environmental engineering at UC Riverside.

Jinkerson and his colleagues at UC Riverside and the University of Delaware have now demonstrated a new type of artificial photosynthesis that allowed them to grow plants in complete darkness.

The technique, they hope, could boost global crop yields by allowing farmers to grow in places that don’t have adequate sunlight — or even indoors, like vertical farms but without the need for LED grow lights.

“If we get rid of the need for sunlight, then we can grow multiple layers of crops at once, similar to the way mushrooms are grown, and create a sort of food factory,” said corresponding author Feng Jiao.

“Imagine someday giant vessels growing tomato plants in the dark and on Mars,” added co-author Martha Orozco-Cárdenas. “How much easier would that be for future Martians?”

While plants use sunlight to internally convert CO2 and water into fuel, the researchers used a device called an electrolyzer to convert CO2 into acetate, the main component of vinegar.

Getting the concentration of acetate just right required a two-step electrolysis process, but once they nailed it, they were able to grow nine different crops, including rice, tomato, and lettuce, directly on their acetate medium in complete darkness.

“We found that a wide range of crops could take the acetate we provided and build it into the major molecular building blocks an organism needs to grow and thrive,” said co-lead author Marcus Harland-Dunaway.

The researchers also explored the use of solar panels to power the electrolysis process used to create the acetate. They found that the approach made the production of algae and yeast — two other food sources for people — far more energy efficient.

Growing plants in total darkness is a dramatic proof of concept for artificial photosynthesis, but we don’t need to grow plants in the dark to benefit from it — the researchers believe farmers could potentially use the acetate as an additional source of carbon and energy to supercharge traditionally grown crops.

“With some breeding and engineering that we are currently working on, we might be able to grow crops with acetate as an extra energy source to boost crop yields,” said Harland-Dunaway.

Still, artificial photosynthesis alone isn’t likely to ensure we have enough food to feed the growing world population, but it’s just one of many solutions being explored.

To make traditional farms more efficient, the agriculture industry is leaning into robotics and automation. At the same time, some groups are developing novel forms of food in the lab, while others are looking for better ways to grow plants indoors and underwater.

Taken together, these innovations could add up to a hunger-free future — both here on Earth and maybe in space, too.

Food
Bacteria breakthrough could create brand new cheese flavors
A new set of experiments has shown for the first time how the unique flavors of different cheeses can be linked to specific types of bacteria. 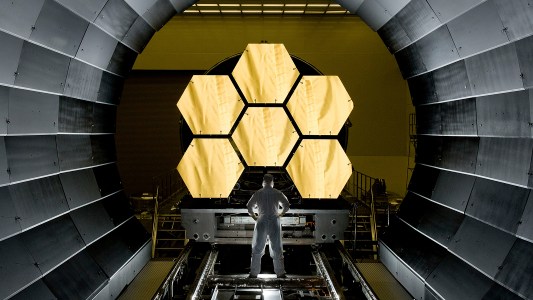 NASA has announced the first targets for the James Webb Space Telescope and plans to share the full-color images on July 12.