The number of free items listed on food-sharing app Olio has increased fivefold since the pandemic began, as more people and grocers work to eliminate waste and battle food insecurity.

Ripple effect: The coronavirus wasn’t the only health threat some people faced in 2020 — a lack of food was another.

In early 2020, U.S. unemployment rates soared to levels not seen in more than 50 years, leaving some unable to buy enough food. Meanwhile, schools transitioned to remote learning, meaning students that once relied on free lunches were now going without the meal.

The result? The number of people who didn’t know where or when their next meal was coming increased from an estimated 35.2 million in 2019 to 45 million in 2020.

The app connects people with extra food to those who want it, either because they are in need or simply don’t want to see it go to waste.

Prior to the pandemic, Olio had about 2 million users listing just under 300,000 food items every month. Now, it has twice as many users posting 1.6 million items every month — and half of them are claimed within 30 minutes of posting.

“The demand is just off the chart,” co-founder Tessa Clarke told BBC News.

Scaling up: While many of the goods posted on Olio are from users’ own fridges and pantries, the app has also partnered with grocery chains to redistribute food that would otherwise go to waste.

Through these partnerships, volunteers for Olio collect the goods at their local store, post them to the food-sharing app, and then coordinate pick-ups with people living in the area.

A six-month trial with U.K.-based grocery chain Tesco saw the equivalent of 93,000 meals saved and distributed to nearly 4,200 people. In September 2020, the two companies announced an official partnership to battle food insecurity long after the pandemic is over.

“If everybody did something small but meaningful, we’d live in a much, much better society,” Olio volunteer Adam Ellison said. “I think COVID’s been a catalyst for that.” 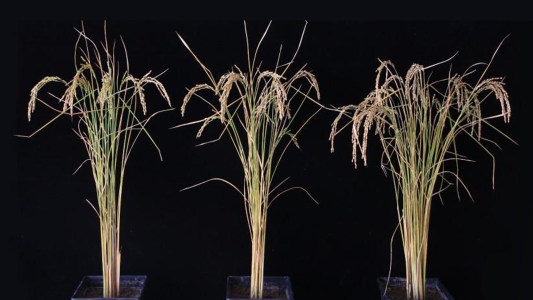 Food
Adding one gene to rice and potatoes increased yields by 50%
Subscribe to Freethink for more great stories
Subscription Center
Sections
Video
Freethink
Subscribe
We focus on solutions: the smartest people, the biggest ideas, and the most ground breaking technology shaping our future.
Subscribe