Two college students have built a robot to help farmers manage grain bins, saving them from having to enter the massive containers themselves — and risking being buried alive in the process.

The machine, called the Grain Weevil robot, was invented by students at the University of Nebraska Omaha (UNO), and if successful, it could save dozens of lives every year.

Bin management: If farmers don’t actively manage their grain, which is stored in massive bins, they risk it going bad before they can sell it.

Part of this involves making sure the grain stays dry, as moisture can cause it to spoil. It can also cause the grain to clump together, which prevents the grain from flowing when it’s time to unload the bin.

To combat moisture, farmers will stand on the grain while using tools to break up the clumps, allowing the grain to dry. They will also enter the bin to level the grain, making sure it’s all the same depth and not piling up in any one part, maximizing storage space.

The challenge: Grain can sometimes give way beneath the feet of a farmer in a bin, causing them to become trapped in or under the grain.

In 2020, there were 35 cases of grain entrapment on U.S. farms — and 20 of them were fatal. Victims of these grain bin accidents are often children and teens, who are exempt from many labor regulations if working on family farms.

“It doesn’t sound like a lot when you look at the numbers, but those are completely preventable deaths,” Zane Zents, the lead software engineer for the Grain Weevil robot, told NTV News. “It’s something that in the 21st century I don’t think we should still be dealing with.”

The Grain Weevil: Zents’ fellow student Ben Johnson was studying electrical engineering at UNO when he received a special request from a farmer friend, Zach Hunnicutt.

“(He) said, ‘Hey, look, you guys build robots. Why don’t you build me a robot so I and my children never have to go into a grain bin again?'” Johnson told AgWeb in May.

Those are completely preventable deaths.

Johnson decided to give it a shot, and together with Zents, he designed and built the Grain Weevil robot.

How it works: The Grain Weevil robot weighs 30 pounds and is about the size and shape of a backpack. Its body rests on two screw-like propellers, which spin to drive the robot through the grain, breaking up and leveling the grain below it.

Once the robot is in a grain bin, a farmer uses a remote control to drive it around (though an autonomous version is in the works). If it accidentally gets buried, the Grain Weevil robot can climb out from under up to five feet of grain.

The next steps: The Grain Weevil team is still developing the farming robot, and the next step in the process is getting it some on-the-job training.

“We are not commercially available yet,” Grain Weevil CEO Chad Johnson (Ben Johnson’s father) told AgWeb. “We are starting six on-farm trials to put the technology through hundreds of hours of tests to make sure it is ready for farmers to use safely.”

“We have not finalized the cost of the Grain Weevil yet, but we have a general idea and a target of under $4,000 per unit,” he added. “However, there are many factors still at play for the final price.” 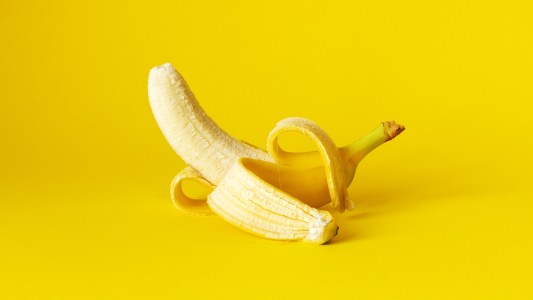 African scientists have used CRISPR to create a disease-resistant banana that is indistinguishable from unmodified plants.