It was 2 a.m. when his robot bee finally took flight.

“The entire flight was 0.1 seconds, but I could see that it could actually work,” says Yufeng Chen.

It may sound like a science fair project, but robot bees are real, and Chen, a researcher at Harvard’s Wyss Institute for Biologically Inspired Engineering, stayed up all night to watch the microbot use its new soft muscles to fly. The bee eventually exceeded Chen’s goal of 16 seconds and now flies up to five minutes.

Until now, robot bees were comprised of rigid actuators, the parts of a machine responsible for movement. But thanks to their soft actuators, Chen’s have an added ability — to crash and recover — making them more bee-like.

Chen has been developing robot bees for 10 years now. Although his bots were inspired by actual bees, they weren’t quite as robust as their real-life counterparts. Real bees are constantly careening into each other, hurtling into windows, and bouncing off walls, yet somehow brushing it off like nothing happened.

But the rigid joints and limbs of a tiny robot are fragile. So Chen and his team developed soft actuators for their robot bees, using soft, insulating materials that deform when touched by an electric field.

With the bee’s new tiny soft muscles that are both resilient and capable of flight, it can crash into walls and collide with other bees and survive the impact. For the first time, a microbot powered by soft actuators has achieved controlled flight. His work is published in Nature.

As it turns out, the ability to crash into objects is a good thing. Chen hopes his soft fly will someday be used for search and rescue efforts. Imagine a swarm of microbots deployed into a collapsed building after an earthquake. A large robot might be too cumbersome to do the work in the cluttered space. But minibots, like Chen’s robot bees, would fly through the pipes, under fallen debris, and likely have more success finding survivors.

It seems like the start of the Black Mirror episode, where a company develops robotic bees in response to the insect’s population decline. But these bees aren’t going to turn against humans any time soon. Even though Chen has also developed robotic insects that can fly and swim, he says there is still more work to be done. The next steps are to combine all his tricks into one “superbee” that can fly, swim, and carry a payload like batteries, solar panels, or cameras. 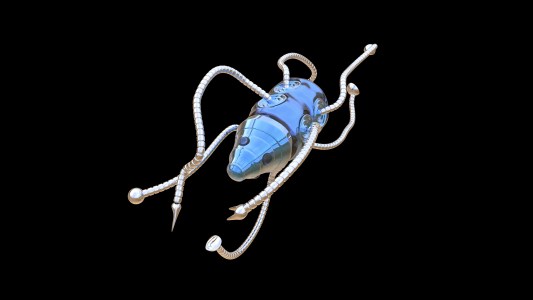 These tiny, robotic machines can deliver drugs directly to infected cells, and they’re changing the future of medicine.