Every year, people flock to marine parks and sanctuaries to see captive dolphins perform tricks and interact with trainers. Some even shell out to swim with the animals themselves.

This is all great news for the dolphins’ owners — a single captive dolphin can generate up to $2 million in annual revenue — but it can be terrible for the dolphins, according to many wildlife experts.

“Most people love dolphins, but the cruelty of this industry is hidden from view,” Julie Cappiello, Wildlife Campaign Manager for World Animal Protection, told TravelPulse. “If people truly knew the suffering these animals endure, they wouldn’t support this industry.”

Now, there’s a realistic robot dolphin that could help end animal cruelty while still allowing people to enjoy the animals — or at least a machine that looks and acts like them.

The robot dolphin is the work of Edge Innovations, an engineering company that has been building realistic animatronics for filmmakers and theme parks for decades.

The company started developing its robot dolphin more than 20 years ago as part of a project with Disney, Roger Holzberg, creative director for Edge’s animatronics program, told SYFY in August.

The current version of the robot is 8.5 feet long, weighs nearly 600 pounds, and is covered in a silicon skin. It can be controlled via a remote, but is also semi-autonomous.

“(The dolphin) has enough AI to be able to do a shallow dive, remain appropriately buoyant, return to the surface, lift its blowhole to simulate taking a breath, and also to be able to realistically complete turns,” Holzberg said.

The robot dolphin looks and acts so much like a real dolphin that it has already reportedly fooled a test audience.

The Marine Park of the Future

The starting cost of Edge’s first robot dolphin is $3 million to $5 million, and the company is still waiting to see if marine parks will buy into the tech — as of August, it was in talks with companies in China and South America, but the pandemic has forced it to push pause on several projects.

However, there is precedent for lifelike but artificial animals capturing the public’s attention — at the Circus Roncalli, audiences can see holographic elephants, and visitors to Times Square can step inside the mouth of a virtual whale at National Geographic’s Ocean Odyssey encounter.

It’s time to reimagine this industry.

The upfront cost of buying a robot dolphin might also be offset by lower maintenance costs — the robot would reportedly have a longer lifespan than a real dolphin, plus it wouldn’t need food or medical care.

“The marine park industry has had falling revenues for over a decade due to ethical concerns and the cost of live animals, yet the public hunger to learn about and experience these animals is still as strong as ever,” Holzberg told the Guardian.

“We believe that it’s time to reimagine this industry and that this approach can be more humane, and more profitable at the same time,” he added. 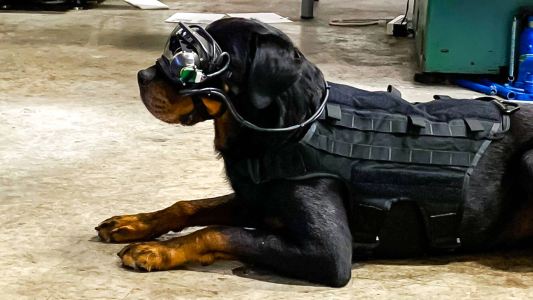 Military dogs will don augmented reality goggles to test their ability to keep soldiers safe by allowing them to direct the dogs from afar.