It may not be long before we see more and more self-driving cars on our city streets. Some hope these cars will make transportation easier and safer. Yet these cars will transform our society in ways we cannot even imagine, in perhaps not-so-straightforward ways.

There are two main ways that self-driving cars can be used. The first is similar to car ownership as we see today — a family owns a car for personal use. The second is a car-sharing model, where you order a self-driving car (much like calling an Uber or Lyft) only when you need it. Each of these models may have very different consequences.

As self-driving cars are first adopted, there may be a boom in the auto industry as people rush to upgrade. If car-sharing is widely adopted, however, it may ultimately mean that fewer cars overall will be needed, since cars can be used more efficiently. After all, today’s cars spend most of their lives parked.

There will also be consequences for insurance companies. About 95% of accidents are caused by human error. However, it would be wrong to assume that self-driving cars will eliminate accidents, since they have to drive on roads surrounded by human drivers.

A 2015 study of Google’s driverless cars found that they were involved in more accidents per mile than human-driven cars — 9.1 collisions per million miles vs. 4.1 for traditional cars — although none were the fault of the Google cars.

More recently, a large study in Phoenix found that Waymo’s cars still have a high accident rate: 7.7 accidents or near-misses (crashes averted by the human backup driver) per million miles — although, again, mostly due to other drivers.

Whether self-driving cars increase or decrease insurance costs may depend on whether they can get better at driving around us, so human drivers stop rear-ending them. If safety and reliability improves, there will be less underwriting from insurance companies. Eventually, this will also correspond to a decrease in premiums.

However, even in a future with solely self-driving cars on the road, accidents may not be completely eliminated, according to a 2020 study by the Institute for Highway Safety. Accidents would still sometimes occur due to vehicle or sensor malfunction, and many accidents would continue to happen unless cars were specifically programmed to always choose safety over speed and convenience.

Some have excitedly discussed the coming of the self-driving car as something that decreases our overall emissions. These cars can drive in a more efficient and eco-friendly way in comparison to the average driver.

However, a lot of this depends on how self-driving cars are deployed.

If the car is doing all the driving, then the passengers could spend time doing other things – reading, watching TV, sleeping, or even working.

“A major factor in people’s housing decisions is length of time (not distance) of their work commute,” Dr. David Danks, a Professor of Data Science & Philosophy at the University of California, San Diego, told Freethink. “Autonomous vehicles change that decision, as commute time no longer has to be wasted or frustrating.”

These cars may transform our society in ways we cannot even imagine, in perhaps not-so-straightforward ways.

Because of this, people may be more inclined to spend more time in their cars. You may not want to live 30 minutes from work if you have to drive in bumper-to-bumper traffic, but you may not mind living an hour away from work if you can just hop into your self-driving car and catch up on work during the drive.

More trips may be made as well. Cars can run errands for people, or even drop the kids off at school. Rather than have to worry about parking downtown, people may have their car drop them off, then have the car drive itself back home and wait to be called back for pick-up.

Not all of these problems would be avoided with a car-sharing model. Self-driving cars may be vastly more convenient than a bus or train, potentially leading to more cars on the street, more congestion, and more pollution.

However, if most self-driving cars are fully electric, emissions may come down, even so.

There will also be consequences for city planning.

In a society dominated by self-driving cars, this picture may radically change. Again, people may not mind spending more time in their cars, so they may be more inclined to live farther away, where rent is more reasonable. This will affect everything from real estate prices to the number of cars on the bridges to emissions.

Downtown parking may also change. Cars may drop off their passengers and then are able to park where space is cheaper or free. In places like Los Angeles, where 81% of land downtown is devoted to parking, this land can be repurposed into parks or homes. Emissions may increase if cars drive farther away to park, and cities would lose revenue from parking.

Another consequence that may go hand in hand with self-driving cars – an increase in surveillance.

Self-driving cars can have 29 cameras to help them drive. These cameras have amazing resolution and are tied to an AI which helps them distinguish what they are seeing. What is the appropriate use of these images?

Obviously, they are immediately used to help the car drive, but can (and should) these images be used to help machine-learning engineers improve how these cars drive? What if the car drives past a crime? Could they be searched, en masse, to find a missing child? If so, what else can, and should, these cameras be used for?

“These cameras can potentially record people in private settings without their consent,” Danks told Freethink. “Our expectations about public spaces would be radically transformed if there were suddenly fleets of mobile cameras on all of our roads.”

Cameras are also often located inside the car. Self-driving cars have the potential to give increased autonomy to the elderly, disabled, or children who are too young to drive, and cameras may be needed to keep these riders safe. Internal cameras can also determine if it is safe to pass control of the car to the driver.

“It is unclear how consent would be obtained from non-owner passengers, or what would happen if someone refused to be recorded. Would the vehicle, for example, refuse to relinquish control for the duration of the trip?” Danks said. “There is a long history of ‘mission creep’ with cameras where they are originally introduced for one purpose, but then start to be used for other reasons.”

In addition, car companies would have real-time knowledge of the location and movement of riders. Some argue we’ve already lost privacy due to tracking from our cell phones, but many feel uncomfortable with this increasing loss of privacy. The implications of ceding still more private space need to be thoroughly considered.

Another consideration to make before self-driving cars are fully deployed – how can we make sure their use is equitable?

“There are three key areas that we need to focus on: policy making, data sharing, and technology deployment,” Dr. Corey Harper, an Assistant Professor of Civil & Environmental Engineering at Carnegie Mellon University, told Freethink. He explained that policy could promote self-driving car-sharing companies to equally distribute cars so that no matter where you are, whether you are downtown, in the suburbs, or in low or high-income areas, your wait for a self-driving car is about the same.

Data sharing ensures transparency so that self-driving car-sharing companies are acting and serving different communities equitably. “Deployment technologies enable greater access to a mobility-limited population,” Harper explained. These include things such as “vehicles with ramps for people with ambulatory difficulties to be able to get in and out of the vehicle safety and providing Braille touchscreens for people with vision difficulties.”

“We make a lot of decisions without considering some of these under-served populations,” Harper said. “Moving forward, policy data in the technologies we’re deploying is going to be very important for us to get towards that more sustainable, smart city that we all envision.”

The time to think about these issues is now, before deployment is really geared-up. A tiered approach, where self-driving cars are used for a limited population at first, may help ease us into the era of self-driving cars, so we can understand how they alter our society. This will give our policies, and ourselves, time to adapt. 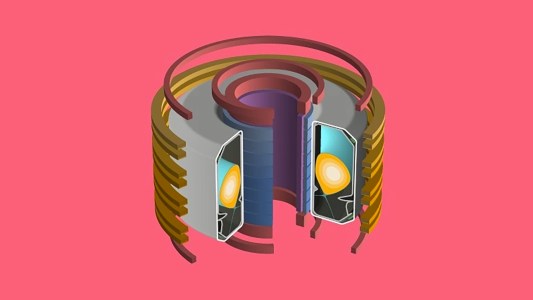 DeepMind has co-developed an AI capable of controlling the super-hot plasma inside a tokamak fusion reactor.