The future could be here sooner than you think.

General Motors (GM) and self-driving car company Cruise have asked regulators for permission to deploy the Cruise Origin — an autonomous vehicle (AV) with no steering wheel, rearview mirrors, or pedals.

If approved, it could be on the assembly line within a year.

“The Cruise Origin is among the most innovative vehicles in history: a zero-emission, shared, electric vehicle that has been purposefully designed from the ground up to operate without a human driver,” Rob Grant, a senior VP at Cruise, wrote in a blog post.

The challenge: Human error is the “critical reason” for 95% of crashes in the U.S., according to the National Highway Traffic Safety Administration (NHTSA).

While factors such as bad weather or poor road design may contribute to crashes, a human mistake is almost always the crucial event in the chain leading up to it.

Besides improving the travel experience, proponents say that self-driving cars could make roads a lot safer by removing the possibility of human error. But we’re still waiting for someone to deploy a fully autonomous car.

What we have right now are semi-autonomous vehicles that can operate without drivers in limited circumstances (like a fixed loop or on the highway).

Not only does that mean there’s still a potential for human error, it also increases the vehicles’ complexity and cost, since developers have to include all the parts needed for both autonomous and manual driving.

The Cruise Origin: GM acquired Cruise in 2016, and together, they set out to develop a self-driving car that would operate strictly as an autonomous rideshare. The Cruise Origin is that vehicle, and it truly looks like nothing else on the road.

“This vehicle is engineered to last a million miles.”

Instead of forward-facing front and rear seats, it has a large cabin area with bench seats that face one another. Six passengers can fit in the vehicle (three on each bench), and they enter it through sliding doors on the side.

​​“The way vehicles are designed, normally they have a hood in the front where the engine is and some storage in the trunk,” Cruise CTO Kyle Vogt told the Verge at the Origin’s 2020 unveiling.  “But when you don’t need all that stuff … we can have this enormous, spacious cabin without taking up any more space on the road than a regular car would. Which is kind of insane.”

Built to be shared: GM and Cruise expect the Cruise Origin to operate like Ubers or Lyfts, picking up and dropping off passengers, from anywhere to anywhere, on demand. That can cause a vehicle to quickly rack up miles, so the developers accounted for that when designing their self-driving car.

“This vehicle is engineered to last a million miles and all the interior components are replaceable … what that does is it drives the cost per mile down way lower than you could ever reach if you took a regular car and tried to retrofit it,” Vogt said.

The big picture: The Cruise Origin isn’t the only strictly autonomous vehicle in development — Amazon subsidiary Zoox is also building a boxy AV for ridesharing, and Apple is working on a steering wheel-less vehicle of its own.

It’ll be up to federal regulators to decide whether any of these vehicles make it to U.S. roads, and it’s hard to predict when GM and Cruise might get a response to their petition or the likelihood of regulators approving the vehicle.

But according to a Reuters report, if the companies are given the greenlight, production of the self-driving car could begin at a GM factory in Detroit in late 2022, with deliveries starting as soon as 2023. 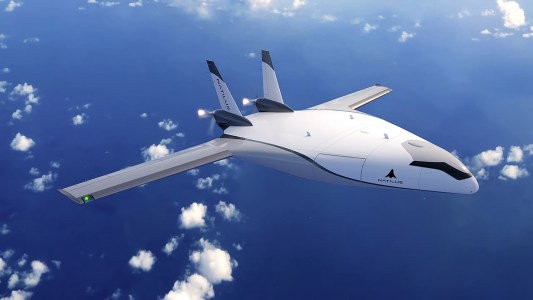 Natilus is developing huge autonomous cargo drones that could cut the cost of air freight by 60% and reduce its carbon emissions by 50%.