Inspired by bats, Virginia Tech professor of mechanical engineering Rolf Mueller has designed one of the best devices for locating the origin of sounds.

The bio-inspired design — with a nod from nature and a deep learning AI assist — outperforms current technology and our own human ears.

Mueller believes that his tech could one day enable autonomous drones to fly using bat-like echolocation.

Hard of hearing: Sound location comes naturally to humans. You likely take notice when you hear a car coming, and thanks to stereo microphones (ears) on both sides of your head, you can probably tell which direction it’s coming from.

According to Virginia Tech Daily, scientists figured out how human ear sound location works in 1907. By using our two ears and the Doppler effect (think of how a siren changes pitch based on whether it’s headed toward you or moving away), we can determine the location of a single sound frequency.

Most sound location technology is informed by the human ear, Mueller said, by using receivers like microphones and either collecting multiple sound frequencies or using multiple “ears.”

Here’s the thing, though: while our ears work well enough, we’re far from tops when it comes to sound location.

Bats do it better: Bats are so good at sound location that they can navigate their mid-air environment via echolocation. By regularly emitting ultrasonic calls — like that submarine sonar ping you hear in movies — and listening for the echoes, bats can determine how close an object is.

Bats can do it even with one ear and one signal to pinpoint objects, and it’s that ability Mueller was hoping to echo with his device.

Mueller and lead author Xiaoyan Yin based their design, published in Nature Machine Intelligence, on the ears of horseshoe and Old World leaf-nosed bats. These bats have ears like New York-style slices, and that outer shape — called the pinna — plays an important role in their sound location.

“We didn’t design it,” Mueller says via Zoom. “We just copied the bat.”

A bat’s ears aren’t just passive receivers — they actually transform the sound waves in order to locate objects. By manipulating their ears extremely fast — in tenths of a second, Mueller says — the bats deform the sound waves, creating a Doppler effect inside the ear itself. (He first noticed these rapid motions because certain bats’ ears were always blurry while he was photographing them for research.)

To better recreate how a bat does its thing, the researchers connected their synthetic bat ear to a string and motor to make it flutter when it received a sound, mimicking the bats’ ability — albeit it much more simplistically.

Bats have a bit more than 20 muscles in their ear, compared to a human’s four. Those muscles are quite fast, and can make complex patterns while the bat is listening, Mueller says, doing a series of motions that look like one handed voguing to illustrate.

“Beyond what is currently in the reach of technology”: By placing a microphone in their synthetic bat ear and wiggling it to create Doppler shifts, Mueller and Yin were able to gather signals that could be used for sound location — but the signals are massively complex.

They turned to a deep learning algorithm, trained to provide the source direction of a sound signal.

The researchers tested their system by putting it on top of a rotating rig. Sounds were emitted from various speakers placed around the ear. Armed with a laser pointer, the faux bat ear turned to locate the source of a sound, aiming for targets attached to the speakers.

In their test, sound location was able to be pinpointed within half a degree. That’s far better than human ears — which can locate it within 9 degrees — and the best tech based on them, which has achieved 7.5 degrees.

“The capabilities are completely beyond what is currently in the reach of technology, and yet all this is achieved with much less effort,” Mueller told Virginia Tech Daily.

That he’s only broadly duplicated a bat’s ability means there may be room yet for improvement.

“We are working on a robot with soft robotic actuators,” Mueller says, like the kind you find in animatronics.

“I don’t know how far you could go, but I wouldn’t be surprised if you could do it by .1 (degrees).”

Navigation through sound location: While the potential maritime and military implications for the tech are obvious — a torpedo with a more accurate sonar suite is more likely to hit its target — that is not the end goal Mueller has in mind for his work.

Instead, Mueller is inspired by autonomous bots.

“I want to create a drone that flies like a bat,” Mueller says, deftly dodging trees and winging through the skies. 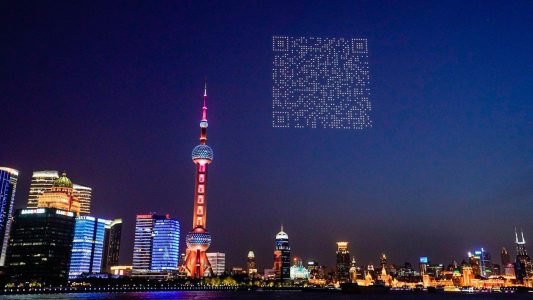 A drone light show staged in celebration of the “Princess Connect! Re:Dive” video game ended with the drones forming a scannable QR code in the sky.