Russia had been launching cyberattacks against Ukraine for years before invading the nation, knocking out the websites of banks, utility companies, and government offices.

Now, with a full-scale war being waged on its soil, Ukraine is on the cyberattack — backed by an IT army of hundreds of thousands of volunteers.

The call: On February 24, the day Russia invaded, a message started to appear on Ukrainian hacker forums: “Ukrainian cybercommunity! It’s time to get involved in the cyber defense of our country.”

The messages, which included links where people could apply to help, were written and posted at the request of Ukraine’s Defense Ministry, two people involved with the effort told Reuters.

Then, on February 26, Mykhailo Fedorov, Ukraine’s vice prime minister, tweeted out a call for people with digital skills to join Ukraine’s “IT army,” along with a link to a Telegram channel where people could find specific operational tasks.

The response: It’s hard to know exactly how many people have volunteered to help Ukraine battle Russia digitally, but 310,000 people were subscribed to the Telegram channel, as of March 15.

The day prior, Viktor Zhora, deputy chief of Ukraine’s State Service of Special Communication and Information Protection, estimated that the volunteer IT army included up to 400,000 specialists from Ukraine and beyond.

“I’m not one for throwing superlatives around, but I would say this level of civic engagement is unprecedented,” Agnes Venema, a national security and intelligence academic at the University of Malta, told the Guardian.

Take ‘em down: The first task posted on the Telegram page was a list of websites — 9 belonging to Russian government offices and 22 to Russian businesses and banks — and a message encouraging any type of cyberattack on them.

Many of the tasks posted since have been links to other sites to target, and Alex, a Ukrainian software engineer in the volunteer IT army, told the Guardian that “all of them are down” within half an hour.

“The jury is very much still out on whether or not they’re actually contributing in a meaningful way.”

Clearly, the group is doing what it’s asked, but it’s hard to say what impact these attacks are having on the war effort.

“The jury is very much still out on whether or not they’re actually contributing in a meaningful way,” Michael Daniel, head of the industry group Cyber Threat Alliance, told USA Today.

“Certainly, I can understand where Ukraine is trying to do this,” he continued. “Why would you not try everything you can when you’re facing this kind of existential crisis, right?”

An international effort of American IT experts, deployed prior to the invasion to help shore up Ukraine’s tech infrastructure, may have had more of an impact, as Russian hacking so far has been much less effective than feared.

Fighting misinformation: Alongside the tasks listing websites to target are ones with links to Russian YouTube channels known to spread Kremlin propaganda about the war in Ukraine and instructions on how to get them taken down.

Caroline, a member of Ukraine’s IT army and former preschool teacher in New York, has also created an English-language website featuring information pulled from the Telegram group that other non-hackers like herself can use to fight Russian disinformation.

If these counters on Russian propaganda and hacks designed to show Russians the truth can inspire more citizens to join the anti-war effort, the rising dissent could increase pressure on Vladimir Putin to end the war — and end the need for a volunteer cyber army. 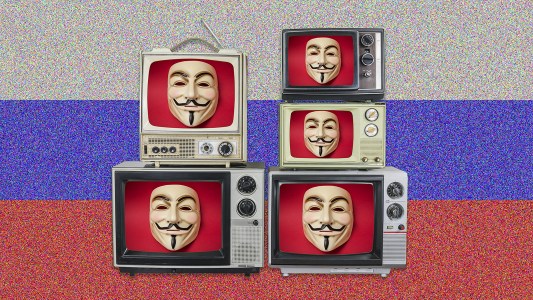