Self-driving cars must operate on precise and accurate data — after all, human lives are at stake. In order to learn how to drive in the real-world, the AI must be presented with a massive amount of real-world data. The compilation of this data, however, requires heavy-lifting on the part of the humans behind the AI. This work is often time-consuming and tedious.

But in stricken Venezuela, citizens are taking up the challenge.

Venezuelans caught in the middle of a political and economic crisis are turning to remote contract work for a steady source of income. As reported by Angela Chen at MIT Technology Review, hundreds of thousands of formerly middle class Venezuelans, thrown into poverty by economic collapse, are now sitting at computers as they help train self-driving cars to identify and avoid obstacles.

A 2018 study (recently released in English) by Florian Alexander Schmidt at Germany’s University of Applied Sciences was among first to document this new online workforce, born from high-tech need in developed countries and worker desperation in Venezuela.

Starting in 2018, Venezuelans have flocked to German crowdsourcing platforms to work on training sets for autonomous vehicles. These require massive amounts of human-verified, definitely correct data that is then fed to machine-learning algorithms. For self-driving cars, this means taking all of the photos and videos captured by a vehicle’s cameras, outlining every object, and then identifying it as “tree,” “bike,” or whatever else. As more objects are correctly identified, the AI learns how to apply fuzzy concepts (like “tree”) to stuff it sees out in the world.

According to Schmidt, Venezuelans have turned to this industry because it offers steady and reliable work. Well-educated members of the former middle class, with computers and a strong Internet connection, are using the crowdsourcing platforms as a consistent source of income, in a country roiling with hyperinflation (10 million percent, per the IMF), poverty, food and medicine shortages, and violence, including one of the world’s highest homicide rates.

A Country in Crisis

Rich in oil, Venezuela was an economic powerhouse in the 1990s. However, growing inequality helped fuel the 1999 election of Hugo Chavez, who steered the country into socialism. Chavez’s economy focused heavily on exporting oil, and when oil prices collapsed, so did the nation’s wealth. Under Chavez’s hand-picked successor, Nicolás Maduro, corruption and bribery have been rampant, and Venezuela’s debts have become unsustainable.

Hyperinflation, driven by the printing of money to cover debts, has led to wages being useless. Multiple raises in minimum wage only end up contributing to the hyperinflation. Millions of Venezuelans have fled the country, leading to a brain drain, furthering exacerbating the crisis.

This past spring, opposition leader Juan Guaidó called on the public and the military to rebel against Maduro. But despite some defections, a full-on rebellion of army and police never came, and now political unrest and violence scar the country.

Against this backdrop, the Venezuelan economy has continued to tank. Even oil production, in a country with the largest proven resources on the planet, has cratered. Citizens who were once comfortable have augured into poverty, and food, medicine, and electricity are in short supply.

Self-driving cars need datasets that are extremely accurate, notes Chen, but creating that data is extremely labor-intensive. To deal with that, autonomous vehicle manufacturers have contracted out to crowdsourcing companies, like Germany’s Mighty AI, to find workers who can troll through millions of images, outlining and tagging visible objects.

According to Schmidt, these crowdsourcing platforms are more enticing than work offered on other platforms, like Amazon’s Mechanical Turk, because they “are treated more like humans and the work is more valued.”

Self-driving car crowdsourcing is also steadier than other options. Schmidt found that Venezuelans, unlike the Italian and Brazilian workers he interviewed, tend to use their AI work as their main source of income, as opposed to a side gig for extra cash. They recruit family and friends as well, leading to rapid growth in the workforce. The platforms were surprised by this influx — little more than adding a Spanish-language version of their sites led to a large bump in Venezuelans signing up.

While a steady income is a lifeline in an economic crisis, the wages are low, and crowdsourcing platforms may sometimes take advantage of workers. In 2015, for instance, American workers filed a class-action lawsuit against the platform Crowdflower, accusing the site of offering gigs that paid below minimum wage. (Crowdflower ended up settling, and no new major cases have been filed, according to Chen.)

“(The Venezuelans) were aware that, on one level, it’s exploitation and they have to do it because everything else failed them,” Schmidt told MIT Technology Review. But in a country facing as many challenges and uncertainties as Venezuela, a low but steady income is better than no income at all.

As some gig workers fight to be classified as employees instead of contractors — employees who can receive health insurance and other benefits that aren’t offered to contractors — platforms like Mighty AI may become an important part of the battleground. Because Mighty AI handles training and assignments, Chen suggests, it is more like a traditional employer than some other gig economy platforms.

AI is an immensely powerful tool, and excitement around its possibilities is well-founded. But the reality behind the scenes — humans hunched over computers, clicking, outlining, and tagging — is often overlooked, forgotten in shiny visions of robots with artificial brains.

Autonomous vehicle crowdsourcing is providing many Venezuelans with stability and money in a time and place where they are desperately lacking. But it is looking more like a safe port in a storm than a serviceable career. 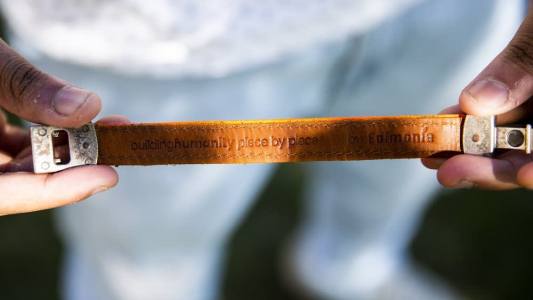 Hordes of bright orange lifejackets are strewn across the rocky beaches of the Greek island of Lesbos. Discarded…