A Honda-established startup is developing a vibrating navigation system that helps visually impaired people get around — vibrating their feet to relay directions.

The challenge: More than 80 million people are either blind or have severely impaired vision, and that can make navigating the world incredibly difficult and dangerous.

There are ways to help those people get around, but each has shortcomings. Canes require them to give up the use of one hand — not ideal for carrying groceries — and guide dogs require them to, well, take care of a dog.

They can use a smartphone navigation app, but those usually deliver directions via audio, and that means wearing headphones that limit their ability to hear noises that might be important, such as honking cars or crosswalk signals.

The background: In 2017, Honda launched a business creation program called IGNITION, giving employees the opportunity to submit proposals for technologies and ideas they believed could solve social issues.

On June 11, the company announced that a group developing a vibrating navigation system to help visually impaired people move more freely and safely would be the first startup to spin out of that program.

The vibrating navigation system: The startup, Ashirase Inc., is developing a wearable device that’s worn on the foot inside a shoe. This wearable connects to a smartphone app similar to the ones that provide audio directions.

The app uses satellite navigation data and information from the foot-worn wearables to keep track of the user’s exact location. It then vibrates different parts of the device in their shoe to give them directions.

The system is very intuitive, too. The area near the toes vibrates to let the person know they should walk straight. Vibrations on the left side of the left foot, meanwhile, signal that it’s time to make a left turn.

We will devote ourselves to realize the freedom of mobility for visually impaired people.

Will it work? We don’t yet know whether people with visual impairments will like using the vibrating navigation system, but that’s something that could be determined through future trials. As it stands, at least one person has tested out the tech, and they seem impressed.

“Using Ashirase enables me to focus more on walking,” a man identified as Nida said in a video, adding, “I think this will allow me to enjoy walking around the city.”

Looking ahead: Ashirase is now working to commercialize its vibrating navigation system in the hopes of beginning sales before the end of March 2023.

“I am sure that we will face many obstacles as we work toward the market launch of Ashirase,” Wataru Chino, the system’s developer, said. “However, we will overcome such obstacles one by one and devote ourselves wholeheartedly to realize the freedom of mobility for visually impaired people.” 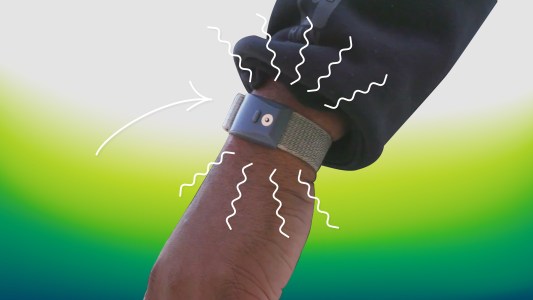 A new kind of wristband is about to enter the wearable tech scene — the first haptic GPS for the blind.

Series | Ramen Profitable
A new kind of haptic wearable: GPS for the blind07:16
Subscribe to Freethink for more great stories
Subscription Center
Sections
Video
Freethink
Subscribe
We focus on solutions: the smartest people, the biggest ideas, and the most ground breaking technology shaping our future.
Subscribe