Seoul National University researchers have built a wearable robot that helps people with ​​spinal cord injuries breathe, cough, and sing by applying pressure to their lungs.

​​“All wearable robots today are about moving the limbs, like the arms, the shoulders, and legs,”  Cho Kyu-jin, director of SNU’s Soft Robotics Research Center, told Wired. “[Exo-Abs is] basically changing the whole volume of your body.”

The challenge: Spinal cord injuries can weaken the muscles used to breathe and cough. While the need to breathe is obvious, coughing is important, too — it clears secretions and bacteria from the lungs, minimizing the risk of infections that can develop into pneumonia.

If this weakness is severe, a person may need the help of a ventilator and breathing tube (inserted into the mouth or nose). They may also need to undergo respiratory therapy, practicing their breathing and actively forcing themselves to cough to keep their lungs clear.

“I couldn’t make [the tones and beats] anymore after I was injured. It was a sound that was unlistenable.”

Beyond these biologically essential actions, paralysis can also make it difficult — or even impossible — for a person to speak or sing.

“The singing I did before and after was completely different,” Lee Nam-hyun, a man paralyzed in a swimming accident in 2004, told Wired. “The tones, the sounds, the beats — I couldn’t make it anymore after I was injured. It was a sound that was unlistenable.”

The idea: Lee made singing again a top goal of his recovery from the accident, and SNU’s wearable robot helped him achieve it.

Exo-Abs consists of several bands that wrap around a user’s torso. When these bands tighten, they apply pressure to the diaphragm that makes it easier for the user to breathe, cough, speak, or sing.

“When you breathe out, you’re basically pushing the belly and narrowing down the volume of the lungs, so we’re trying to mimic that process,” Cho said.

Automatic assistance: The machine that causes the bands to tighten or relax is small enough to fit into a backpack, which can be slung on the back of a wheelchair, and an AI lets the wearable robot know what level of pressure to apply and when.

That is based on information about the user (their fitness level, body shape, etc.) as well as data collected by sensors — a microphone listens for signs they’re trying to talk, and a sensor-filled tube around the waist monitors their breathing.

Lee was an early tester of Exo-Abs, and it helped him recover the muscle memory needed to major in opera at SNU and perform with the KBS Symphony Orchestra. Thanks to it and the rest of his respiratory therapy regimen, he can now sing without the device.

Looking ahead: Other patients undergoing respiratory therapy are now getting a chance to train with Exo-Abs at SNU Hospital. Its creators are hopeful the wearable robot might one day provide people in need of breathing assistance with a less-intrusive alternative to ventilators.

“As this technology develops, perhaps it will become like self-driving cars where it gets better and better,” Lee said. “As with many prototype devices, I’m hoping this device as well becomes lighter, portable, and beautifully designed in the future.” 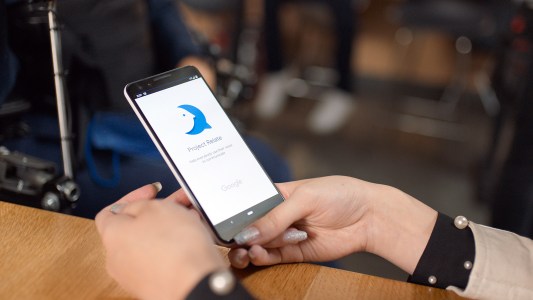 Google’s Project Relate app makes it easier for people with speech impairments to communicate and use speech-recognition tech.